Typinator 2.0 released with a flood of new features 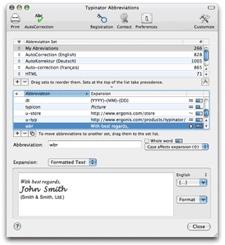 Typing tools that increase your efficiency are all the rage for anyone who has to type more than their name and credit card number on a daily basis, and ergonis just upped the ante with the release of Typinator 2.0. Competing directly with similar tools like TextExpander and TypeIt4Me, this new version of Typinator brings a virtual boatload of new features to the table, including:As a paid user of TextExpander, this new release of Typinator looks quite tasty indeed. I'm actually just glad the typing tool space is getting more competitive, as I can't write or work on the web without one anymore. A demo is of course available, while a single licenses sells for about $26 (EUR 19.99).
In this article: abbreviations, management, snippets, spelling, text, typinator, typing
All products recommended by Engadget are selected by our editorial team, independent of our parent company. Some of our stories include affiliate links. If you buy something through one of these links, we may earn an affiliate commission.
Share
Tweet
Share