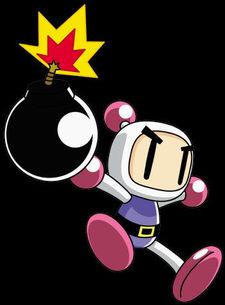 For classic multiplayer fans, there is perhaps no Xbox Live Arcade title as anticipated as Bomberman Live. Published by Hudson and developed by Backbone Entertainment, Bomberman Live looks to properly bring classic Bomberman action into the online arena, and 1UP recently got an extended look at the game.. Sure, many attempts have been made -- even Saturn Bomberman had online play -- but Xbox Live gives Bomberman Live an edge unknown to previous online entries. Bomberman Live allows for up to 8 players online or 4 players locally. The game also allows multiple players on one 'box to venture online (here's hoping the game allows non-Live subscribers as guests). In addition to the traditional deathmatch mode, Bomberman Live also includes other modes, such as the Paint Bomb mode featured in recent titles. The game also features Vision camera support, which will snap a shot of each player the moment they are defeated and also give the round winner a few moments to gloat on camera. Finally, there are loads of costume pieces that players can use to customize their, um, Bombermen (Bomberfolk, Bomberpeople?). Costume pieces are unlocked by collecting Costume Balls during gameplay.

All in all, it sounds like Bomberman Live is everything that old school fans could hope for. Here's hoping the game lives up to its legacy (or, at the very least, better than Bomberman Act: Zero). So, how much would you be willing to pay for "real" Bomberman.

In this article: backbone, backbone entertainment, BackboneEntertainment, bomberman, bomberman live, BombermanLive, hudson, hudson soft, HudsonSoft
All products recommended by Engadget are selected by our editorial team, independent of our parent company. Some of our stories include affiliate links. If you buy something through one of these links, we may earn an affiliate commission.
Share
Tweet
Share