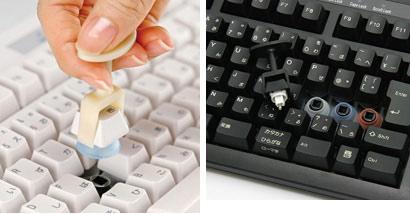 If Fujitsu has its way, typing on a keyboard that you're uncomfortable with will soon become a thing of the past, and hopefully your children will never have to know what it was like to work on an input device that you wanted to smash against the nearest wall. For those affected by such problems, the company has created a semi-modular system called the LiberTouch which lets you customize the key-layout, as well as attenuate the sound and tactile response of the keys. The board also has a single USB port, and a somewhat surgical looking "tool" used (presumably) to make "extractions" -- so you don't get your hands dirty. No word yet on street date or price.
In this article: customize, fujitsu, keyboard, libertouch
All products recommended by Engadget are selected by our editorial team, independent of our parent company. Some of our stories include affiliate links. If you buy something through one of these links, we may earn an affiliate commission.
Share
Tweet
Share