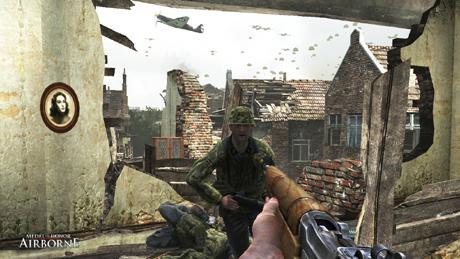 Forget about Hour of Victory and put Medal of Honor: Airborne on your list if you're eager to get back to some WWII gaming. It'll help bandage the wound left by Call of Duty when they decided to go all Modern Warfare on us.

What sets it apart from the other entries in the Medal of Honor series is the Airborne factor that really changes the way you approach each new campaign. You parachute into each level from a C-47 transport plane, and can choose exactly where you'll land on the map, if you're halfway decent at steering your 'chute. This changes the gameplay over the previous game dramatically, because you can play each map differently every time you drop in.

It's not simply a matter of choosing a spot on the field and appearing there, though. You have to glide yourself in via your parachute, avoid enemy fire (coming down right on a machine gun nest, for instance ... no es bueno), and you also have to nail your landing. There are three different types of landings, and each one affects you different. A Botched landing throws you to the ground, and it takes you a few seconds for you to stagger to your feet, which means you're a perfect target for eager Germans. A Stuck landing has you flaring your chute as you land, although it takes a second or two to drift to the ground, and you have to release your chute before you can draw your weapon. The Greased landing is what you'll want to hit every time. You glide in for a smooth landing, release your chute and pull your weapon up all in one movement, basically allowing you to hit the ground running and firing.

Of course, we botched our landing pretty spectacularly, and started taking enemy fire right away. We thought it would be smart to ignore the "suggested" landing points in an effort to get right into the battle, but it didn't go too well. Hello death and humiliation. Our second effort went a bit better ... meaning that we botched our landing again, but this time there was no one around to witness it and unload a clip into our backside. We also were shown that you can land anywhere you want, even on top of buildings, which adds another dimension of gameplay. For instance, if you see an emplacement of enemy soldiers, you can land on a building near them and rain bullets on them from above.

Speaking about the enemies, we're assured that they have much more advanced AI (which pretty much every developer will tell you these days), and for the most part that actually seemed to be true. We had one German soldier pinned behind a truck, and he stayed there, firing at us every now and then. He didn't decide to try and rush us on his own, and he even chucked a couple of grenades our way. In fact, if you flank them in order to get a shot, the enemy will realize their cover is blown and will go searching for more. Howere, this doesn't mean that they all act like Sun Tzu during every encounter, but they are generally smarter than the enemies in say ... Hour of Victory. There were still a few times in the game when it was a bit easy to pick off enemy soldier after enemy soldier.

One of the cooler features we saw was the ability to upgrade your weapons throughout the campaign. There's a meter to the side of the screen that fills as you frag enemies, and when it reaches the top, you'll get a weapon upgrade like two clips taped together for faster reloads, adding a sight for great accuracy, and more. You get more points for things like headshots and multiple kills with a grenade, and that gives you the upgrade a lot faster. Medal of Honor: Vanguard offered the ability to upgrade weapons as well, but only on a very limited basis.

Graphically, the game looks as good as the last couple of Call of Duty titles, and the nighttime level we played in looked pretty impressive. There were ambient lighting effects, smoke, fire, and the nighttime sky in the level, all looking sharp and smooth. The enemies have several different death animations, based on how you they expire in the field, and the character models are well-detailed with a lot of attention to accuracy, although that's nothing new in WWII games these days, and has come to be expected. If the developer has a wrong weapon or part of the uniform wrong, they know they'll be hearing about it from fans.

Each level has "drop point objectives" that you have to achieve to advance, and if you fail several of them, you'll have to re-jump in and start over again. The campaigns they've included in the game are Operation Torch (North Africa -- the training level takes place here), Operation Husky (invasion of Sicily), Operation Avalanche (invasion of Italy), Operation Neptune (the invasion of Normandy), Operation Market Garden, and others. They promise that it's historically accurate, and there's a "secret" level or two that they wouldn't tell us about. At the preview event where we played the game, they weren't talking about multiplayer, but at E3 they announced it would be in the game when it ships next month, and we'll have more details about that as it comes out.

The sound is also fairly amazing, and just like Call of Duty and other games using 5.1 sound, you really feel like you're in the midst of a real battle. You'll hear enemy chatter, your squadmates, explosions, ricochets, air support, and more as you play through the campaigns. It's easy to discount sound design in a game, since everyone tends to focus on graphics and gameplay, but when someone does it right, it's a welcome addition.

In this article: Airborne, E3, E307, impressions, Medal of Honor, MedalOfHonor, PC, PS3, WWII, Xbox-360
All products recommended by Engadget are selected by our editorial team, independent of our parent company. Some of our stories include affiliate links. If you buy something through one of these links, we may earn an affiliate commission.
Share
Tweet
Share