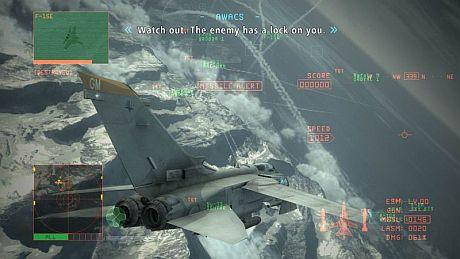 Did the Ace Combat series ever look this good? I have to admit -- flight games were never a genre I enjoyed. However, one look at Ace Combat 6 on Xbox 360 changed my opinion instantly. It looks jaw-droppingly gorgeous. If it weren't for the constant threat of war, we'd love to simply fly around and observe the environments. From afar, the world below looks photo-realistic. Remarkably, the world retains a great deal of detail even when flying up close. Namco Bandai has an incredible technical achievement on their hands: realizing that every building in the city below is actually rendered deserves applause.

Beyond the graphics, we were impressed by the surprisingly intense gameplay. The field of play is huge, and skirmishes can occur at any point in the map. Aerial, ground and naval combats all come into play ... and thankfully, you have allies at your disposal. It only takes a simple press of the button to command awaiting ships to fire missiles at enemies. In our E3 demo, we saw a massive flurry of missiles come from supporting naval troops. Dozens of smoke trails filled the sky in a truly impressive display. Not only does it look good, but it added a great feeling of being part of an actual war, one with multiple fronts.

Our brief time with Ace Combat 6 was a fun, visceral experience. The game will support online multiplayer through Xbox Live ... and we can't wait. Ace Combat 6 will be available exclusively for Xbox 360 later this year. 15
In this article: acecombat, E3, e307, namcobandai, Xbox-360
All products recommended by Engadget are selected by our editorial team, independent of our parent company. Some of our stories include affiliate links. If you buy something through one of these links, we may earn an affiliate commission.
Share
Tweet
Share