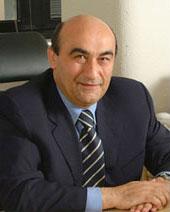 Acer President Gianfranco Lanci doesn't look to have minced any words about his thoughts on Vista during a recent interview with the Financial Times Deutschland, reportedly telling the publication that "the entire industry is disappointed by Windows Vista." As if that wasn't a big enough shot across the bow, Lanci further went on to say that it's "not going to change in the second half of this year," adding that "I really don't think that someone has bought a new PC specifically for Vista." Lanci apparently didn't have quite everything out of his system just yet though, also lambasting Vista for not being ready when it was released, saying that "stability is certainly a problem." We some suspect he won't be too pleased with Microsoft's recent pronouncements on the matter either.

In this article: acer, ce oh, ce oh no, ce-oh, ce-oh no, ce-oh no he didnt, ce-oh-no, Ce-ohNo, CeOh, ceohno, Gianfranco Lanci, GianfrancoLanci, microsoft, vista
All products recommended by Engadget are selected by our editorial team, independent of our parent company. Some of our stories include affiliate links. If you buy something through one of these links, we may earn an affiliate commission.
Share
Tweet
Share