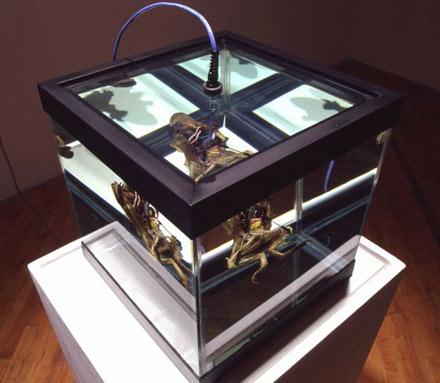 Similar to the previously seen Text-o-possum, someone's bad art project has spread, virus-like, to the internet, where we have to be subjected to its heavy-handed proclamations on the role of technology in modern society. This time it's "Experiments in Galvanism", a tiny server embedded in a dead frog, submerged in mineral oil, which is remotely made to twitch via Galvanism (the contraction of a muscle when stimulated by electric current). Of course, the piece's creator Garnet Hertz has a little more going for him than the Text-o-possum's architect. Firstly, besides the fact that the frog is dead, it actually does have a kind of server inside of it, and secondly, Garnet has managed to convince other people that he's put together something legitimately special -- which is half the trick of art, really. If you've been looking for something to wax philosophical over, hit the read link.

[Via Wired]
In this article: art, experiments in galvanism, ExperimentsInGalvanism, garnet hertz, GarnetHertz, server, twitching frog, TwitchingFrog
All products recommended by Engadget are selected by our editorial team, independent of our parent company. Some of our stories include affiliate links. If you buy something through one of these links, we may earn an affiliate commission.
Share
Tweet
Share