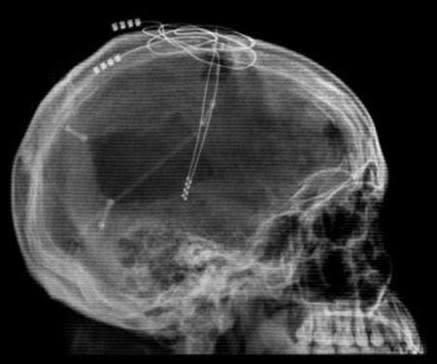 A 38-year-old man who had been in a near-coma for six years was recently awakened via the use of a pacemaker and two electrodes which were deeply implanted in his brain. The electrical device, manufactured by a company called Medtronic, was used to send impulses to the area of the brain regulating consciousness, and researchers believe that the stimulation may be enhancing brain circuits that are still capable of functioning. The man, the first of 12 to undergo the procedure, has gone from a vegetative state to being able to play cards, speak with family members, and take trips outside. While this isn't exactly a new technology -- as doctors have been experimenting with deep-brain stimulation in the treatment of Parkinson's, epilepsy, and brain injuries for some time -- it is a clear sign that there's hope for patients whom the medical community has been, heretofore, unable to treat.
In this article: deep-brain stimulation, Deep-brainStimulation, medical, medical research, MedicalResearch, medtronics, scientific research, ScientificResearch
All products recommended by Engadget are selected by our editorial team, independent of our parent company. Some of our stories include affiliate links. If you buy something through one of these links, we may earn an affiliate commission.
Share
Tweet
Share