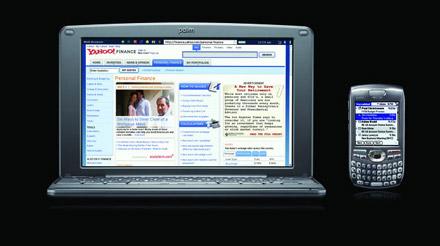 According to a Barron's report published today, Deutsche Bank analyst Johnathan Goldberg has released a short note claiming that the Foleo -- Palm's much-derided quasi-laptop -- is headed for production delays. Goldberg states in the note that "In a round of checks yesterday we learned that the Palm Foleo will be delayed," and went on to say the snag is caused by "software bugs," which prevent the system from syncing properly with "most models of the Treo." Clearly not the news that Palm wants people to hear right now, with pressure already to-the-nines on the Foleo and its place (or lack thereof) in the market. With the recent addition of Elevation Partners to Palm's board, the company is due to take on $400 million in new debt, but on a phone call to Barron's later in the day, Goldberg said that "a leveraged re-cap is not going to help them." Succinctly mirroring Engadget's own feelings on the matter, the analyst noted that "There's something wrong with the company," and suggested Palm alleviate some of its problems by introducing "...new software," and "...new form factors." We couldn't have put it better ourselves.

Read -- Palm Sub-Laptop "Foleo" Delayed, Says Deutsche; Does Anyone Care?
Read -- Palm: It's The Software, Stupid, Says Deutsche's Goldberg; Where's the Sense of Urgency?
In this article: barron's, breaking news, BreakingNews, delay, delays, elevation partners, ElevationPartners, foleo, industry analyst, IndustryAnalyst, jonathan goldberg, JonathanGoldberg, palm, treo
All products recommended by Engadget are selected by our editorial team, independent of our parent company. Some of our stories include affiliate links. If you buy something through one of these links, we may earn an affiliate commission.
Share
Tweet
Share