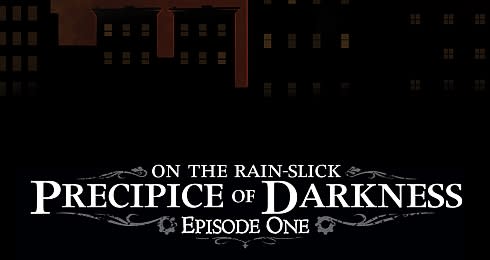 We went to the Press only Hothead Games Q&A for their upcoming PC (Windows, Mac and Linux) game for Penny Arcade, On the Rain-Slick Precipice of Darkness: Episode One. It opened up with a new trailer that built upon the previous one, that has taken huge steps in capturing the Penny Arcade look, in both the 2D and 3D realm. As they start showing the same demo on the show floor today, the trailer and gameplay footage will more than likely be hitting the intertubes soon so you can form your own opinions in the the progress of the art direction. After the trailer played the fired up their build of the game and started a new campaign. Full details on the demo and information from after the Q&A session can be found after the break.

Upon starting the game, the first thing to be done is character creation. Now, you can spend as much or as little time as you want tweaking your facial features, body proportions and the like to create an amusing character or a Penny Arcade-ized avatar of yourself. The customization options are moderately robust, and fall slightly short of what's capable of the Mii Channel on the Nintendo Wii, there are plenty of options available to create a truly unique looking character. When you create your character, not only are you making the 3D model, but your avatar will also be matched in the 2D cutscenes, and given the art direction on both, they are easily identified as the same person.

Once finished with the creation, the opening cutscene plays, with your character minding his or her own business raking leaves and tending to the front yard outside your abode. Unfortunately, an "FF" Prime is on the warpath and during its tirade crushes your house. It continues down the street with Gabe and Tycho chasing after it. This sets up your player's motivation, first off there may be a twinge of vengeance for you home being crushed, and because of it, you now need to find a place to live.

Once the actual game started, it was a few steps ahead of where the opening cutscene had left off and Gabe and Tycho had already joined your party. With a point and click interface, Hothead is finding a happy medium between the RPG and Adventure genres. The short cutscene that set up the game had a slumlord that had a sack of hobos storming into a nearby apartment building, leaving a trail of stinky homeless people in his wake. Tycho suggest we follow the proverbial breadcrumbs, which can be fought for experience.

Battle initiative is proximity based, and not random, and the actual battles are turn based. Gabe's attacks focus on close range combat, using his fists, Tycho uses his tommy gun at range, and your player at this point used the rake he had at the beginning of the game, though new weapons can be acquired later on.

When a character is getting attacked, you can hit the space bar to block to reduce, where a perfect block will give you a free counter attack maneuver. Each character has their own special move, which has its own mini-game associated with it to determine the damage dealt. Tycho's mini-game has a crosshair with directions that quickly flash on screen,and you need to hit the corresponding arrow keys, and his attack is throwing a gas can into the enemy crowd and firing, causing a large explosion that actually killed the adversaries outright. Gabe's mini-game was essentially rapidly tapping the spacebar to unleash a flurry of fists on his opponents. Your characters mini-game involved tapping the spacebar in time with a needle rotating through four quadrants, and attack with the rake was very powerful, resulting in a rather gruesome death for the hobo on the receiving end, as will any kill with a special move. After every battle you get all of your HP back, as Hothead didn't like the idea of running around in the world looking for health items.

The environment looked very stylized, with a dark ominous mood, and retained a very Penny Arcade feel, like for example the camera will follow your characters to a point where you will be moving to the next "panel" from a new camera angle continued down the path. All of this is accentuated by Jerry Holkins writing of all the dialogue and story in the game, which is all text based, as giving the characters voice actors would take away from the comic strip feel set up by all the other elements. Dialogue trees when interacting with NPCs are rich and obviously very funny for those in tune with PA's style of humor.

When you reach the slumlord's hideout in the apartment building it is revealed that he is using hobos to manufacture FFs. After fighting a slew of FFs and homeless, you reach the slumlord and his cronies, and you can't target him for attacks until you take care of the other enemies. Your party members never die when they run out of HP, and are just knocked out, able to be revived using items during the battle, or automatically if you prevail without them. You have the option to flee during a fight, and the sounds of a baby crying plays should you do so. Unfortunately, the slumlord defeated the party, concluding the demo, which finished with an FF juicing the player's cranium.

During the Q&A session, Hothead said that their target gameplay length was 5 to 6 hours, and they plan to release new episodes every 3 to 4 months, and even discussed this as part of the first "season". They are using the Torque engine, which help, with the cross-platform approach. In terms of system requirements, they haven't started optimization yet, but expect those with a decent amount of RAM, and reasonable processors and graphics cards from the last four years should be able to run the game. The want it to work on laptops, and don't want consumers to have to upgrade to play it if possible.

It will be distributed digitally from a site built by Hothead, and they are in talks with distribution companies for making the game widely available. They'd love to get it on the current consoles, and are in talks with getting it on Xbox Live Arcade and the Playstation Store. They are official developers on the consoles and know their architecture, and we'll stay tuned for any news. Hothead's Audio Director, Adam Gejdos, stated that the sound and music for Episode One was all complete, and noted that the music composition was all done by a Vancouver, BC local, Jeff Tymoschuk, and did an excellent job of setting the atmosphere.All in all it's looking very promising and we can't wait to hear more on Episode One's development in the future.
In this article: Hothead, hotheadgames, Mac, ontherainslickprecipiceofdarkness, pax07, PC, pennyarcadeadventures
All products recommended by Engadget are selected by our editorial team, independent of our parent company. Some of our stories include affiliate links. If you buy something through one of these links, we may earn an affiliate commission.
Share
Tweet
Share