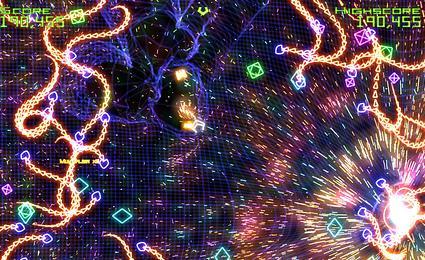 Chris Kohler over at Wired took time to check out the Wii game Geometry Wars: Galaxies while at PAX07 and came away with the opinion that it was better than that of its original Xbox Live Arcade game. Even though we're huge Nintendo fans, we can't say we actually believe him, because the dual-analog control scheme of the original is just about perfect. Still, he sticks to his guns.

Not only does he comment that the control setup of the Wii game is more intuitive, he also comments that there isn't any reason why the game couldn't have been a download on Wii Ware. We have to agree, because even though the game is almost guaranteed to be fun, we doubt it'll ever warrant a price tag of more than twenty dollars.
In this article: Action, Arcade, Bizarre, Bizarre-Creations, Geometry-Wars, Geometry-Wars-Galaxies, Kuju, Kuju-Entertainment, pax07, Shmup, Sierra
All products recommended by Engadget are selected by our editorial team, independent of our parent company. Some of our stories include affiliate links. If you buy something through one of these links, we may earn an affiliate commission.
Share
Tweet
Share