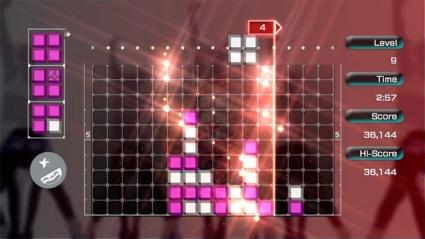 We've got a little theme going of Tetsuya Mizuguchi providing non-answers to speculation about Wii versions of his most popular franchises. First it was Space Channel 5, and now it's his puzzle game (and first PSP killer app) Lumines.

The discussion in this Game Informer interview turned to new mechanics in a possible Lumines sequel, and then to putting that new sequel on the Wii or DS, since the game has been ported pretty much everywhere else by now. Mizuguchi responded "I can't say which is first. Maybe we will be inspired by the platform. With these powerful machines [gestures at PS3 and 360], we can use many effects and sounds. With the DS and PSP, you can have them any time, anywhere or touch the screen."

At the end of the interview, the Miz threw in some bonus not-saying-much about Space Channel 5, in response to the question "Is 2008 going to be the year Ulala returns?": "Maybe I should send her an e-mail-"Please answer sometime!" [laughs] It would be really good timing to make a Space Channel 5 sequel, in general. I think the Wii would be a really good fit, with the special controls. The audience is wider, too. I think casual players would like it, too."

The moral of the story: Tetsuya Mizuguchi is leakproof, and won't reveal anything about anything until he is good and ready.
In this article: lumines, mizuguchi, space-channel-5
All products recommended by Engadget are selected by our editorial team, independent of our parent company. Some of our stories include affiliate links. If you buy something through one of these links, we may earn an affiliate commission.
Share
Tweet
Share