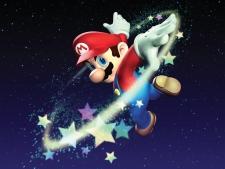 The first Japanese reviews of Super Mario Galaxy are trickling in in advance of the game's Nov. 1 Japanese release, and so far they're looking pretty good. Venerable game rag Famitsu's four reviewers gave the game two nines and two tens for a total score of 38/40. This puts the game just under Super Mario 64's 39/40 and just above Super Mario Sunshine's 37/40 from the magazine. Overall, the score puts it behind just 22 games in the magazine's history.

A partial review translation by 1UP reveals nothing but praise for the new Mario game, calling it "a game anyone can really play" and urging that "every game fan should play this game." Of course it's hard to imagine Famitsu giving the high-profile game a bad review -- the magazine has been accused of doling out scores based mainly on hype and sales expectations. Despite this, there's a part of us that just wants to believe that the high praise is based on genuine enjoyment and not marketing dollars. We'll find out for ourselves when the game reaches our shores Nov. 12.

In this article: Famitsu, Galaxy, mario, MarioGalaxy, SuperMarioGalaxy, wii
All products recommended by Engadget are selected by our editorial team, independent of our parent company. Some of our stories include affiliate links. If you buy something through one of these links, we may earn an affiliate commission.
Share
Tweet
Share