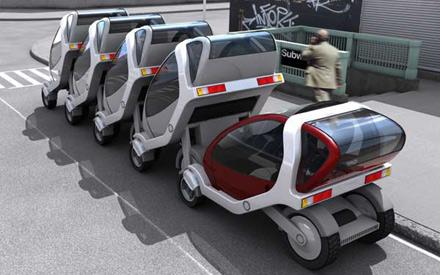 Sure, we know you love actually owning a car, but let's be honest -- in large cities with condensed layouts, your H3 doesn't make a lot of sense. A group of researchers at MIT have been hard at work developing a solution that's kind on the planet and your scrawny legs. A team called Smart Cities have designed a small, two-seat, electric vehicle -- which they call the City Car -- that can be "stacked" in convenient locations (say, just outside a subway stop), and then taken on short trips around urban areas. The cars -- which are based around an omnidirectional "robot wheel" that encases an electric motor, suspension, and steering -- can be "folded" and attached to a group of other cars for charging. The lineups of rentable vehicles would be accessible from various points around a city, with six or eight cars occupying just a single "regular" car space. Of course, you'll have to forgo your 24-inch rims... but that's life.

[Via Technology Review]
In this article: carbon free, CarbonFree, city car, CityCar, concept, design, electric car, ElectricCar, mit, rental car, RentalCar, smart cities, SmartCities, stackable
All products recommended by Engadget are selected by our editorial team, independent of our parent company. Some of our stories include affiliate links. If you buy something through one of these links, we may earn an affiliate commission.
Share
Tweet
Share