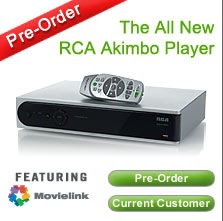 No real shocker here: set-top box-maker and service provider Akimbo is apparently shutting down its hardware line as of tomorrow. In a way it's almost uneventful that yet another set-top box is going teats up; which is, of course, why we were a little skeptical about the announcement of VuDu last week. Still, even if Akimbo's MovieLink deal didn't work out, they're not vanishing completely -- you've still got the software service end of their business, able to deliver programming to your PC through their Media Center interface, for example. Those who plunked down for a box, though, can apparently expect discounts and even in some cases refunds for their investment. But for now it looks like Akimbo's biggest guns have been silenced.

In this article: akimbo, breaking news, BreakingNews, set-top box, Set-topBox
All products recommended by Engadget are selected by our editorial team, independent of our parent company. Some of our stories include affiliate links. If you buy something through one of these links, we may earn an affiliate commission.
Share
Tweet
Share
Save