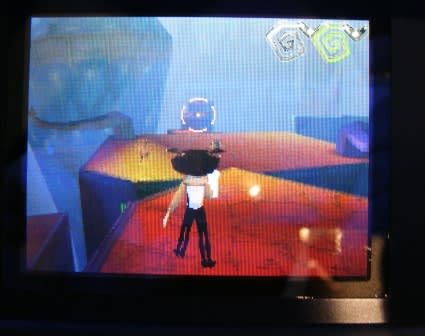 I didn't get as much time with Crackpot's Insecticide as I liked, but I got to mess around in both an action stage and the detective mode, at least superficially enough to know how they worked. I can tell you right away that all three Psychonauts owners, as well as LucasArts adventure fans, are going to want this.

The action mode looks and feels just like Psychonauts, with the exception of touch-screen integration, of course, and your character's use of a projectile weapon rather than melee. It's pretty much a standard 3D platformer. The graphics have taken a significant hit compared to the concept art, obviously, but the style of the game (like its neighbor at the Gamecock booth, Dementium) helps cover. The touch-screen control scheme was a little hard to manage, seeming to involve more limbs than a non-arthropod like myself had available. However, I quickly found that I could lock-on to targets with a button, and could therefore avoid the stylus altogether. I fell through platforms a couple of times, but that was actually a pretty common problem for some of the really early versions of games I played at PAX.

I played the detective mode very briefly (check Wired for more detailed impressions), but I know it involved clicking around the area looking for clues. There was the usual clicking around and being told over and over again that "that's not important"-- you know, basic adventure game stuff. When I did find something worth investigating-- a body-- it was highlighted on the bottom screen with new artwork, like in Snatcher.

I could tell from my brief time that the aesthetic and humor that characterize classic adventure games is present in Insecticide, meaning that as long as the platforming gets a little refinement, we have every reason to start freaking out.
In this article: adventure, crackpot, gamecock, insecticide, pax07, platformer
All products recommended by Engadget are selected by our editorial team, independent of our parent company. Some of our stories include affiliate links. If you buy something through one of these links, we may earn an affiliate commission.
Share
Tweet
Share
Save