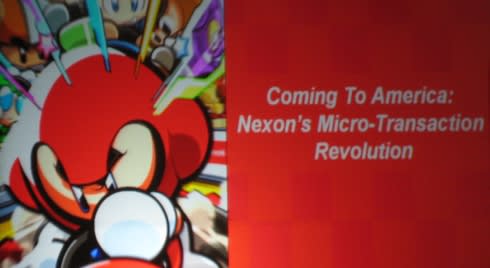 If you haven't heard of Minho Kim, I'll forgive you -- I hadn't heard of him either until the name showed up in the list of keynote presentations at the Austin Game Developers Conference. Kim is Nexon America's director of game operations, and while Nexon hasn't made a big impact in North American markets, their free-to-play, micro-transaction driven online games (the best known of which is probably MapleStory) are a hit in Asia and Europe. Kim's keynote launches the final day of the conference with a discussion of micro-transactions. Joystiq is on-site waiting for festivities to begin, so keep reading for a play-by-play.

9:36 AM CST: The keynote, scheduled to start at 9:30 AM CST, has been delayed until 9:45 AM CST, due to the closure of the nearby Congress Ave bridge (presumably to allow everyone some extra time to get in).

9:49 AM CST: What are casual online games? Social and free. What are micro-transactions? Items and customization, decorative (identity), functional (advantage/freedom), inexpensive (range from $1 to $10).

9:51 AM CST: MapleStory, the world's first 2D side-scrolling MMORPG. One of the most profitable online games, globally, making only $16 million monthly, with 72+ million users world-wide.

9:52 AM CST: KartRacer, a 3D casul racing MMO, the most played online game in Korea (~25% of the population). Has over 160 million registered users.

9:53 AM CST: Are micro-transactions viable in the US? After all...
9:55 AM CST: A case-study of MapleStory
9:57 AM CST: When launched, they didn't know who the players were, who the players could be, whether players would buy virtual items...

9:58 AM CST: Commercialization -- launched beta cash shop with PayPal in Nov. 2005 (timed with the holidays to get the best adoption)

9:59 AM CST: Fraud! As Nexon was celebrating their success, they found they were having issues with fraud, which they were unprepared for. Time-delay on finding out about fraud, it could be 6 months. Fraud can lead to fines (can be large) and expulsion from credit card processing.

10:02 AM CST: To fight back, Nexon attempts to stop fraud before it occurs and educate users about potential fraud. Also:
10:04 AM CST: Hacking adn abuse are an inevitable part of the business. If there is financial value in it, your product will be hacked or abused. Nexon has found the US to be a hacking hotbed -- it's not a problem they dealt with in Korea.

10:05 AM CST: Hacking can --
10:06 AM CST: Farmers invade the game and flood hunting areas -- when hacking is conducted in such volume, legit players are forced to succumb to the pressure.

10:07 AM CST: Hacking beckame an epidemic that could not be ignored. Nexon had to ramp up their GM staff and extend coverage, develop detection tools and measures to mass ban hackers, moved critical values to server side, implemented 3rd party solutions, user education.

10:08 AM CST: Target audience:
10:09 AM CST: The pricing dilemma for prepaid cards: because their PayPal users trended towards spending $20+, they opted for $25 cards as well as $10 cards. Kind of a risk with limited retail space, but it was successful.
10:10 AM CST: Who the players are. Members of MapleStory's Myspace community shows some "cool" people, not just kids or anime fans. People are meeting each other in Maplestory. There are lots of different kinds of people playing.

10:13 AM CST: They got this demographic by... not advertising. They had the right timing on launch, teens were starting to live online.

10:15 AM CST: Because the playerbase was so culturally different, Nexon created a domestic localization team. We're shown some artwork done by the North American team which was sent back to Korea to be MapleStory-ified. Also localized holidays, i.e. Thanksgiving, Halloween, etc.

10:17 AM CST: Product placement with Target when they launched their pre-paid cards. Created parent NPCs that gave "chores" which gave the player an "allowance" which could be used to get cards at Target. Around 200,000 players participated in the event which translated into $1.6 million in sales and 600,000 items sold in February 2007. Really sped up the adoption of the prepaid cards.

10:19 AM CST: Why prepaid cards? It was the right fit for Nexon's demographic (50% of players did not have direct access to credit cards). Diversified payment options, when they had previously been very reliant on credit cards.

10:20 AM CST: The challenges of prepaid cards. Retailers weren't keen on the concept, Nexon wasn't a big presence in the US and even showing numbers it was difficult to prove that this would be successful. Had to convince retailers that it was an underground hit. Also, the physical cards cost money upfront for Nexon.

10:21 AM CST: A few days into the Target release, cards started selling out. Target was initially skeptical, but they had to order more to keep up with demand. Translated into $1.6 million in sales and 600,000 items sold in February 2007. The Nexon Game Card is currently the #2 prepaid card on the market, right after iTunes.

10:24 AM CST: Future plans for MapleStory include continued expansion of content, advertising (starting on TV in September or October, still questions on how to market to their demographic and communicate their brand), interactive trading game in development with Wizards of the Coast, animation produced by Madhouse in Japan, product placements, licensing.

That's all for this keynote -- but stay tuned for more MMO news from AGDC!
In this article: agdc, austin game developers conference, AustinGameDevelopersConference, liveblog, liveblogging, maplestory, microtransaction, microtransactions, minho kim, MinhoKim, nexon, nexon america, NexonAmerica
All products recommended by Engadget are selected by our editorial team, independent of our parent company. Some of our stories include affiliate links. If you buy something through one of these links, we may earn an affiliate commission.
Share
Tweet
Share