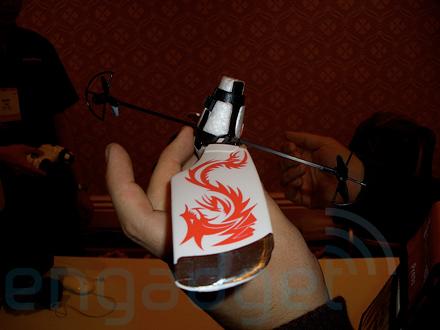 What can we say? WowWee knows how to build themselves some entertaining bots. Of the three though, the flying Bladestar tickled us the most fancy. Unlike that mini helicopter you likely unboxed during the holidays, the Bladestar is actually controllable and able to maintain proximity to its user instead of flying off props-first into the family portrait. The WiFi-enabled home exploration Rovio is a novel idea with that NorthStar navigation. A system which uses a projector to cast a pair of red spots on the ceiling which Rovio will use to calculate its way home. Add pet and you've got instant fun. The three-wheelin' Mr. Personality Tribot features a "Wii-like" remote control which can send the bot off like a typical RC car. Something we wanted to do after just a few seconds of its 10 minute program of inane chatter. Expect to see the Bladestar in Target stores (exclusively) around February for a reasonable $49, the Rovio by summer for $299, and Mr. Annoying Personality sometime this fall for $99. Plenty of video on the way in a few.

34
In this article: bladestar, ces, CES 2008, Ces2008, features, hands-on, mr personality, mr. personality, Mr.Personality, MrPersonality, robio, wowwee
All products recommended by Engadget are selected by our editorial team, independent of our parent company. Some of our stories include affiliate links. If you buy something through one of these links, we may earn an affiliate commission.
Share
Tweet
Share