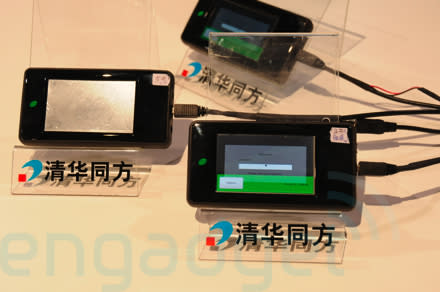 THTF (which stands for Tsinghua Tongfang, if you must know) is at CES showing its LimePC series of simple, lightweight computers, and we took a particular interest in three of 'em, ordered by size from largest to smallest: the UMPC, HandheldPC, and PalmPC (pictured) models. All three pack an uber-low power mobileGT core from Freescale, WiFi, Bluetooth 2.0 + EDR, and touchscreen displays; the Palm PC and HandheldPC feature either 8 or 16GB of Flash, while the UMPC upgrades to a hard drive between 30 and 100GB in capacity. Though both the hardware and the Linux-based software were extremely raw here, we see promise in these totally hackable little beasts -- particularly in the smaller of the two, both of which are totally pocketable. Check out the gallery to see all three doing their thing.

Gallery: Hands-on with the LimePC | 26 Photos 26
In this article: ces, ces 2008, Ces2008, features, hands on, hands-on, HandsOn, limepc, linux, umpc
All products recommended by Engadget are selected by our editorial team, independent of our parent company. Some of our stories include affiliate links. If you buy something through one of these links, we may earn an affiliate commission.
Share
Tweet
Share