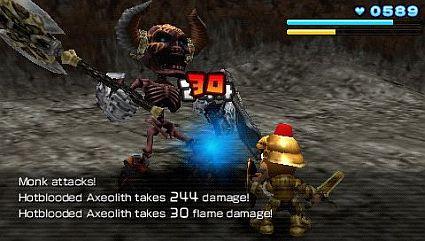 Ape Quest took everyone by surprise when it stealthily launched on the PLAYSTATION Store. This download-exclusive title is unique in a number of ways. Not only is it one of the few original games for download on the PC Store, it combines RPG elements and mini-games into an experience that's inherent of the Ape franchise. The purchase model for the game sets a new standard that other games may follow in the future: a free demo can be further expanded by the purchase of one of three official expansions. Each content pack can be purchased for $10 each, or a bundle can be purchased at a budget price of $20.

In concept, Ape Quest should be a success. The blending of mini-games and RPG elements makes for an intriguing combination. However, the game is unable to capitalize on its unique formula. Both the RPG side and mini-games side of the game are lackluster, creating an experience that is vapid and wholly uninspiring.

RPG fans will find themselves shortchanged with almost every aspect of the game. The "story," if one can call it such, is minimal at best. The main character haphazardly unleashes a Pandora's Box of monsters upon the world, and it's up to you to save the world. Though it's attempted to be told in jest, the potential humor is lost due to poor presentation. Where's the witty dialogue? Clever animations that'll crack a smile? Unfortunately, this Quest is fairly lifeless.

Navigation around the world is rather archaic as well, with your ape forced to follow pre-determined paths. There's very little incentive for exploration on the map, due to the rather restrictive routes your character is forced to traverse. The environments, with their bland textures, and uninspired art, do little to inspire a sense of wonder into the adventure.

Combat is also a bit too primitive, with a battle system that harkens back to the 8 and 16-bit era of game design. This isn't necessarily a bad thing, but there's very little strategy beyond choosing a regular attack or a special attack (which uses a separate gauge, which continuously fills during battle after each successful hit). We give kudos to the development team for offering different speeds for battle. If you can't stand watching the battle animations, you can simply hit the Fast option and battles can be done in a matter of seconds.

There are a number of items you can collect on your quest, and we appreciate how any armor or weapons you equip will appear on your ape. With so many items, you can get a very distinct look for your ape very quickly. As is standard nowadays, there's also a rudimentary item creation system, where you can combine old items to form new ones.

The game is structured in a way that lets you choose from a number of quests and tackle them in any order you choose. We like the open nature of the quests, but most involve simply going to a predesignated area on the map and playing a mini-game. Along the way, you'll find various demonic minions, all of rather uninspired design.

Unfortunately, the mini-games are the game's weakest points. They are necessary for progress, but are generally not much fun to play. Many of the angel versus demon games are amusing in concept. For example, one mini-game has your ape tempted to look into a peep hole. An angel and demon must then duke it out to correctly steer his morals. These games range from badminton to arm wrestling. The simpler games work the best -- however, any requiring a bit more complexity don't work due to poor design and controls.

Using either the D-Pad or analog stick in these games proves to be rather futile. Regardless of your preferred control scheme, your ape will control much too stiffly. Compared to the likes of Mario Party, it's clear how much Ape Quest falls short. The inability to practice a game before it begins is also frustrating, as the player is simply thrust into a game that can potentially lead to a Game Over. It's more than frustrating to lose to a game, and be thrown all the way back to the last town you visited.

There are some smart design choices, however. The load times are non-existent and the save-anywhere functionality is a must for any RPG. However, by failing to provide either a compelling RPG or mini-game experience, Ape Quest fails to deliver on any of its potential. Even with its budget price, we simply cannot recommend this game. With its disappointing quality, one can see why the game was given the "surprise" treatment. We bought the game, unknowing of what was in store for us. Don't make the same mistake.

PSP Fanboy score: 5.0
In this article: ape-quest, joystiqfeatures, review
All products recommended by Engadget are selected by our editorial team, independent of our parent company. Some of our stories include affiliate links. If you buy something through one of these links, we may earn an affiliate commission.
Share
Tweet
Share