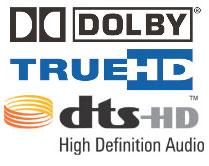 With HD DVD and Blu-ray also came the ultimate audio options in a time when convenience trumps quality in most of the audio world. While SACD and DVD-Audio are all but a bust, audiophiles can turn to HD DVD and Blu-ray for the ultimate audio experience. But even if you aren't an audiophile, it's still worth it to many to take advantage of the master quality audio available on the HD discs that you've already paid for. Unfortunately, it isn't as easy as it used to be, and after realzing how much confusion there was surrounding these next-gen codecs, we decided to try to help clear up the confusion. So if you want to know how to take advantage of everything on the discs you already own, but don't know why Toslink doesn't cut it anymore (and what's so special about about HDMI 1.3), then read on, will ya?


Starting with DVD, we had to start using Toslink instead of the old trusty red and white analog cables, but with HD DVD and Blu-ray, it's no longer that easy. As great as Toslink is, it's only capable of carying 1.5Mbps of data, which limits you to either lossy Dolby Digital, DTS, or two channel PCM (uncompressed). So in order to take advantage of the new codecs, we have to leave Toslink behind and move on, or back depending on your configuration. Notably, there are a few ways that you can utilize the latest codecs, but the way you do it depends on your equipment and preferences. The two main options are to either decompress within the HD movie player or in your AV receiver. Assuming your equipment supports both -- although most do not -- you can join a thread at AVS to debate the merits of each, but since most folks don't have a choice, we'll cover the pair here.

The new codecs
The difference between the next-gen audio codecs is way beyond the scope of this feature, but to lay them out there to see if your player has support, here goes. Dolby Digital Plus (next generation of Dobly Digital, still lossy), PCM (uncompressed lossless, think CD) Dolby TrueHD (Dolby's lossless audio) DTS-HD HR (next generation of DTS, still lossy) and finally DTS-HD MA (lossless version of DTS). Basically DTS-HD MA, Dolby TrueHD, and PCM are all exact copies of the studio masters and arguably the same -- we're going to completely avoid the entire sample rate discussion here, sorry.

The new connections
You have three options for connectors that will allow you to take advantage of all the next-gen codecs; HDMI, HDMI 1.3, and discrete analog cables. The benefit of using HDMI over analog cables is obviously the digital transmission, but also, less wires as you can use one cable instead of six (5.1) or eight (7.1). In regards to audio, the advantage of HDMI 1.3 (preferably 1.3a to help solve possible lip sync issues) is its ability to carry compressed audio (aka bitstream) -- we'll get into why later -- rather than the previous version which could only carry uncompressed audio (LPCM).

Decompressing in the player
Home theater amplifiers don't evolve at the same rate as other electronics, and usually an amp that was good five years ago is still good today. So we understand that people can be hesitant to replace their AV receiver just to listen to the latest codecs. Luckily, most older receivers still have HDMI (pre 1.3) or discrete analog inputs (6 or 8). For this reason, having an HD movie player that can decode internally is advantageous, as it will handle the latest codecs and allow your older amp to just take the signal and amplify it for your speakers. The other advantage to decoding in the player is that if discs were authored with the advanced authoring method, the player can mix interactive feature's sounds with the regular audio from the movie -- things like beeps from the menus and directors commentary can fall into this category. If you decode in your AV receiver, you won't be able to take advantage of the additional sounds.

AV Receivers
If it has HDMI or analog inputs, the chances are very good that it'll work when the player is doing the decoding.

Decompressing in the AV receiver
If you have the latest AV receiver with HDMI 1.3, you can set your player to send the compressed signal (aka bitstream) to it and let it do the heavy work. Both your HD movie player and your AV receiver have to support each individual codec though. So just because your player will output every codec via bitstream, doesn't mean your receiver can decode them. Although you can't take advantage of advanced authored movies, the advantage to decoding in the AV receiver is that you usually have access to more advanced sound processing. While equipment varies, in most cases the only way to take advantage of the auto level and delay adjustments is to decode in the AV receiver. If you are in a dedicated home theater this can be less important, but since many living rooms prevent optimal speaker placement, having the ability to adjust the level of a speaker or add a delay to simulate distance can be critical.

So there you go, simple right? All you need is all new equipment -- that may or may not be clearly advertised -- connected with either HDMI or discrete analog cables, then an hour or so to read the manual, and you're all set. Seriously, even if you have the latest and greatest connected via HDMI 1.3, you may still have spend some time to ensure the player is set to output the optimal signal for your receiver and then decide what that signal is. Yeah we know, it's complicated, but at least we gave you a head start.

A special thanks to Tyler at Format War Central for helping figure this out.

These lists are not comprehensive and because of confusing terminology (and downright inaccurate documentation) it can be very difficult to tell what equipment supports what. So if you have first hand experience with any of our examples (or others) we'd love your help to make sure our lists are accurate.
In this article: Dolby, Dolby Digital Plus, Dolby TrueHD, DolbyDigitalPlus, DolbyTruehd, DTS-HD, DTS-HD HR, DTS-HD MA, Dts-hdHr, Dts-hdMa, features, hd, LPCM, PCM, TrueHD
All products recommended by Engadget are selected by our editorial team, independent of our parent company. Some of our stories include affiliate links. If you buy something through one of these links, we may earn an affiliate commission.
Share
Tweet
Share