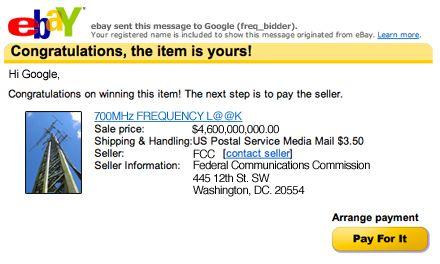 Since the first rumblings of the 700MHz auction began, there's been a fair amount of confusion, doubt, and distress over just what exactly this whole thing means. With the champagne-chugging news that bids have reached the $4.6 billion reserve for the "C" block and enabled the "open access" rules in that sector of the bands -- it seems prudent to explain just exactly what we're getting into with this new chapter in the FCC-regulated airwaves saga, and what open access really means to you.

The first thing you have to understand is that this frequency represents a much broader range for wireless transmission than any we're seeing in wide use right now. The 700MHz spectrum penetrates buildings, is available in rural areas, and covers all 50 states in the good old US of A -- there's a reason why industry pundits are calling it "beachfront wireless property." The soon-to-be-vacated bands could be a gold mine to whoever owns them, and a blessing to consumers in America. Imagine having continuous, unrestricted access to high-speed data and voice connections wherever you drove in your car, in whatever building you went into, and just about anywhere else you could think of. Sounds sweet, right? Well not so fast.

In 2007, groups like Save The Internet and the ACLU, along with people like Lawrence Lessig pushed for rules to be applied to the 700MHz auction which would encourage fair competition once the bands had been sold. In all, there were four main tenets of "openness" that were being asked for; open devices, open applications, open services, and open networks. When push came to shove, the FCC decided on adopting only two out of the four: open devices and open applications. This means that the consumer experience with this new spectrum will be largely dependent on who gets control of it to begin with -- hence all the noise you've heard from companies like Verizon and Google lately.

Those two components left on the cutting room floor included provisions that would have forced the winner of the frequency to leave some of that bandwidth open to small companies and start-ups, allowing them to lease spectrum at wholesale prices for any use that wasn't harmful. Proponents say this scenario would encourage innovation and competition, driving choices up and costs down for the end user. Now that possibility hangs in the balance.
The battle for ultimate supremacy

In our current system, phone and cable companies such as AT&T, Verizon, and Comcast exert more than 96-percent of control over access for residential broadband users. It's to be assumed that if an elephantine company like Verzion wins the auction and gets control over the spectrum, they're not going to suddenly start offering chunks of frequency to competitors and johnny-come-latelys. In all likelihood, Verizon would lock down the frequencies to its services -- much like it does with our phone lines -- and that will be the end of the story. We'll get a new band, but we'll still have to ask for our portion of gruel the way we do now. However, if Google wins the auction, they could take a more altruistic approach to the acquisition and adhere to all four of those open access rules, which means the frequency would be wide open for start-ups and new competition -- it would be a game changer. Some have even speculated that Google might swap part of its band for a portion of Sprint's 2.5GHz WiMAX service, extending open access rules to that spectrum as well. You can imagine the possibilities.

Verizon could build a broadband network and we'd all have to pay to get on-board, while Google might allow lots of different providers to lease out services, kind of like more versatile MVNOs.

Until the auction ends and the "secret" winning bid is revealed, we won't know where we stand, and once we do know, a whole new handful of questions will be raised.

Regardless of who's victorious in the auction, however, we'll see half of those open access rules come to fruition. The first -- open devices -- will effect the most noticeable change in the way telcos normally do business. With that clause in place, we'll likely start to see a market of carrier-free phones and devices -- gadgets made to work in harmony with the 700MHz band, but not locked into a service provider like AT&T. The iPhone couldn't exist in a 700MHz world -- it would have to be transportable to other carriers.

The second rule is open applications. This clause essentially demands that applications created for use on 700MHz devices aren't restricted to a single carrier or provider. If you buy a phone with an IM app, and you move your service to a new provider, that application must still be accessible and useable regardless of your service. Like the open devices clause, this will likely spur a more competitive market for software and services, as designers won't have to be constantly molding applications to separate networks with their own arcane rules.

While the whole mess seems complicated, the potential outcomes are pretty basic; go with the old-school team, get the old-school treatment, or go with the new guys and hope they change the score. Open devices and applications sound nice, but they're not too different from an unlocked GSM phone with Google Maps on it -- you can pretty much take that anywhere and use the application. While we'll see new technologies emerge, the real sea-change needs to happen in how we get and use our broadband, and until this auction comes to a close, that's a question that will remain unanswered.

In this article: 700mhz, 700mhz auction, 700mhzAuction, fcc, features, google, verizon
All products recommended by Engadget are selected by our editorial team, independent of our parent company. Some of our stories include affiliate links. If you buy something through one of these links, we may earn an affiliate commission.
Share
Tweet
Share