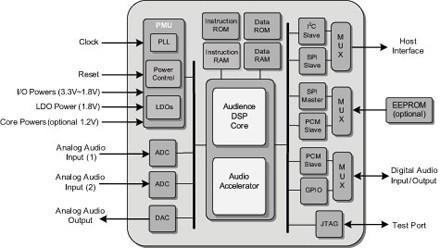 A small company coming out of stealth mode at MWC this week is making some pretty wild promises about its new silicon -- and phone manufacturers must be buying the hype, because several have apparently have signed their names on the dotted line. The California start-up, Audience, is showing a 2.7 x 3.5mm chip that it claims uses some pretty wild algorithms to go beyond existing technologies like Motorola's CrystalTalk to reduce outgoing and incoming noise on calls by up to 25 decibels, enough to significantly reduce or entirely eliminate the sound of trains and yappy morons at Metro stops, car traffic, and loud music. The firm didn't disclose who its manufacturer partners were, only saying that there'd be further announcements later in the year. What's tha-- huh? No! We said, THERE'D BE FURTHER ANNOUNCEMENTS LATER IN THE YEAR.

[Via New York Times]
In this article: audience, chip, mobile, mwc, noise reduction, NoiseReduction
All products recommended by Engadget are selected by our editorial team, independent of our parent company. Some of our stories include affiliate links. If you buy something through one of these links, we may earn an affiliate commission.
Share
Tweet
Share