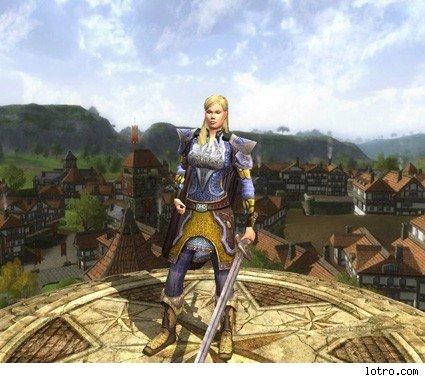 In many ways, picking a race for yourself in an MMO is very much a personal choice. However it can help to have some tips and an overall viewpoint on the subject. This guide is here for old players or new players that are unsure of the the finer details of each race in Lord of the Rings Online. The goal isn't to answer the question of which race is best, but rather to give a few tips and some advice on the strong points of the races in Middle-earth. In this first part of our guide to help you choose your race in LotRO, we'll explore the races of both Man and Elf.

Obviously if a player has their heart set on being any single race, this guide isn't going to change their mind. Even if you've already made up your mind on a race (or already chosen it), this guide could contain a couple helpful chunks of information.

The first thing you should know is that due to the recent Barbershop system being added in Book 12, whatever hair, facial hair, eyebrows, skin or details you pick can be changed later for a small fee in silver. So don't feel like you're stuck with the hair you've got, but do remember that faces, eyes and mouths are still permanent.

In Middle-earth, the race of man is famous for their courage and resourcefulness. And while Man have the shortest natural lives of all the races in Middle-earth, theirs alone is a people destined to live years beyond the Third Age. Mortality was given to Man as a gift, but has become considered "The Doom of Men" from which many find reason for grief and despair. While Courage and honor can be Man's greatest and most celebrated trait, many also fall foolishly to ambition, deceit and betrayal. Man is also an incredibly varied race, hailing from many different places and heritages throughout Middle-earth.

Here are the passive skills for Man:

There are four lands to hail from as a Man: Rohan, Gondor, Dale and Bree-land. When selecting a land to hail from, it will only determine your first optional title and nothing more. So if you happen to love the Horse-lords of the Riddermark then by all means select Rohan worry free. The starting area for Man is the town of Archet, a small Bree-land village that lies just north of Bree itself. You'll find yourself at odds with wolves, boars and bandits as you adventure through the countryside. Plenty of good quests are available to move a player past level 10, so you won't find yourself lacking in experience or equipment as you level your way out of this newbie zone.

Analysis
Many players in MMOs fancy themselves an Elf or some other magical race over what is commonly considered the mundane, boring humans. However there is definitely something to be said for experiencing the fantastic world of Middle-earth as the race of Man. On the lore-side of making your decision, playing as the Fourth Age's race of destiny can be pretty cool at times. Also, many players tend to empathize with in-game events much more easily when they play as a character that is human.

On the serious side of things, Man receives many bonuses that boost Morale and Will. Even though they start out with a -8 to Will, by level 13 a Deed opens up that -- upon completion -- gives the race of Man a +20 to will. So if you're a player who loves being a main tank (Guardian) then Man isn't a terrible choice at all -- especially at endgame after earning the Strength of Morale trait, which restores around 3000 Morale instantly.

That isn't to say any of the other classes aren't viable -- they are. Still, many of the melee classes benefit from Strength of Morale, regardless of whether or not they're tanking; so choosing some sort of up-close and personal class would be beneficial. Also, don't forget that Man is the only race able to play the Captain class -- a class able to raise fallen allies and send troops (pets) into battle. The mere fact that being a Captain means extra overall support and combat revives (gained at level 20) will get you many party invites as you level up in LotRO.

A race of tall, strong and graceful people, the Elves possess sharp senses and a deep-running love for the world's natural beauty. In times long since past, the Elves -- known to some as the Fair Folk -- have openly welcomed the younger races of Middle-earth; even allying with them in times of great necessity or peril. although centuries of betrayal, war and hardships have turned them into a people fiercely protective of their secluded place in the world. Elves live long lives and have similarly long memories, so it's not surprising that they have become a wary people over time. Some Elves have even secluded themselves from their own kind and found home in the ancient forests throughout Middle-earth, this gives you a good idea of just how far their memories of past differences reach.

As a race in any fantasy MMO, Elves have always been a very popular choice. However in Lord of the Rings Online the elves you get to play are the original deal, which is the reason certain fans of the Elves are so very magnetized towards them. They're represented well in LotRO, with plenty of back-story and personality in tow. So if you're hoping that Turbine brought one of fantasies more cherished races to life properly, you'll be pleased.

There are five lands from which Elven players can pick their racial title from: Edhellond, Lindon, Lórien, Mirkwood and Rivendell. The starting area for Elves is the town of Edhelion and the surrounding mountains of Ered Luin populated by the stout Dwarven race -- also the Dwarven starting area. Sharing this land means there is usually a good amount of other players with which to group, although since most of the quests are easily completed solo grouping isn't a requirement. Just like Archet, the starting Elven areas will easily provide enough quests to reach level 10. Eventually players will want to travel eastward, to the land of Bree where many other players gather together after level 10.
Analysis

Easily one of the more popular of the four races in Lord of the Rings Online, being an Elf comes with obvious cultural and lore draws. Looking at it from a statistical standpoint, Elves make good Hunters -- at least when you consider their increased agility. In fact, when taking racial traits into consideration, Elves make wonderful damage dealers in general. Simply because they get improved bow damage and a racial stealth -- which allows them to become much more sneaky in PvMP. Granted, the Elven stealth is a natural ability and not trained -- so don't expect to be stalking around like the Burglar classes do.

However, any of the classes will play just fine if you choose to be an Elf. It's only a matter of whether or not you're big on having an extra tactical-edge in PvMP -- as a Hunter or Champion -- that you'll want to consider picking this race. 24
In this article: archet, barbershop, elf, elves, guide, lord-of-the-rings-online, lotro, man, men, middle-earth, races, racial-choice, turbine, walk-through
All products recommended by Engadget are selected by our editorial team, independent of our parent company. Some of our stories include affiliate links. If you buy something through one of these links, we may earn an affiliate commission.
Share
Tweet
Share