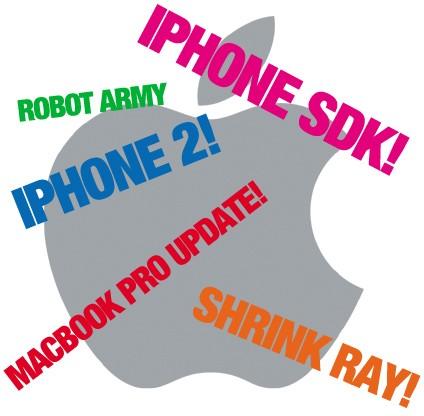 As you may or may not know, Apple has made some sort of announcement -- however minor -- every Tuesday since the beginning of 2008. The internet is currently stacked floor-to-ceiling with guesses of what this last Tuesday in February will bring. Many are speculating that it's going to be the often-discussed, never-seen MacBook Pro update, while others are certain that this will be the day old Jobsy unveils iPhone's supposedly-delayed SDK to the world. Still there are those who believe this Tuesday will see the launch of the Apple Robot Army, while many think that we're going to finally get a look at that iShrink shrink ray that's been long-rumored. Of course, it's possible this will be a heaping dose of iNothing. We want to know: what do the talented, handsome, and infinitely-wise readers of Engadget think we'll see tomorrow?

Read - More New Apple Products... This Tuesday?
Read - Tuesday's Coming
In this article: apple, iphone, iphone sdk, IphoneSdk, macbook pro, macbook pro update, MacbookPro, MacbookProUpdate, refresh, rumor, speculation
All products recommended by Engadget are selected by our editorial team, independent of our parent company. Some of our stories include affiliate links. If you buy something through one of these links, we may earn an affiliate commission.
Share
Tweet
Share