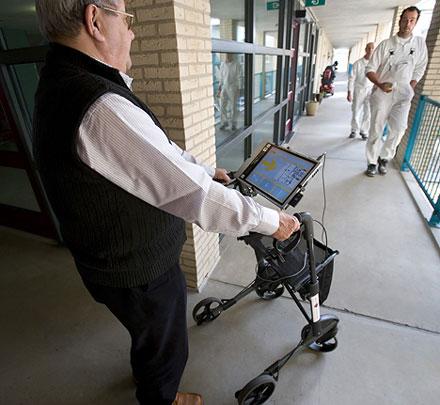 We've already seen GPS used to track elderly patients, but some student researchers now look to be taking the idea one step further, with them outfitting some nursing center patients' walkers with a GPS system that helps guide them around. While the exact technical details are a bit unclear, the system apparently uses GPS when the patients are out and about, and relies on a WiFi-based system to direct 'em around inside the nursing center itself. The entire system has also obviously been about as simplified as possible, with it boasting just five buttons and large arrows pointing the way to the patients' destination. As a student project, however, it's still quite a ways from gaining any widespread use, although it has apparently been at use at the one nursing center their testing it at for several months already. Let's just hope folks don't take to relying on it too much -- we all know where that can lead.

[Thanks, Jack]
In this article: elderly, gps, walker
All products recommended by Engadget are selected by our editorial team, independent of our parent company. Some of our stories include affiliate links. If you buy something through one of these links, we may earn an affiliate commission.
Share
Tweet
Share