Conceptual hotel takes a note from the Death Star 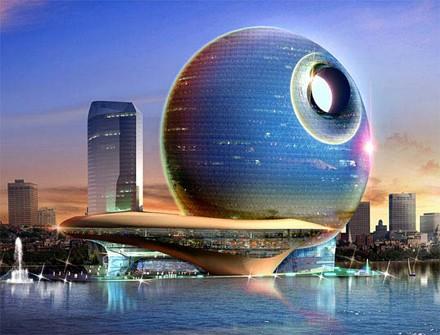 We can't say with a straight face that the capital of Azerbaijan is high on our list of places to vacation at, but for Star Wars fanatics, the case could be different. Reportedly, Heerim Architects has dreamt up a couple of "lunar inspired" projects for the Asian country, one of which (Full Moon Bay) looks an awful lot like the Death Star. Granted, the building looks entirely different from varying angles, but we're choosing to focus on the one that brings back fond memories of light sabers blazing and wookiees waltzing. Truth be told, we've no idea if these facilities will ever break ground, but we're absolutely certain the powers in Dubai are already planning to recreate the entire Star Wars universe if this thing goes forward.

[Via Inhabitat]
In this article: Azerbaijan, concept, death star, DeathStar, design, Heerim Architects, HeerimArchitects, hotel, lodging, motel, star wars, StarWars
All products recommended by Engadget are selected by our editorial team, independent of our parent company. Some of our stories include affiliate links. If you buy something through one of these links, we may earn an affiliate commission.
Share
Tweet
Share