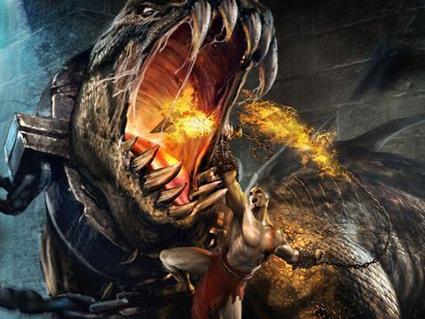 God of War games, as you all know, are epic. A major contributing factor to that legendary atmosphere is undoubtedly the game's musical score -- to that we have Gerard Marino to thank. In a recent interview with Music 4 Games, Marino discussed what went into making the music compositions for Chains of Olympus as well as shed some light on his future projects.

Marino says that the music in Chains of Olympus is "a bit lighter" than the previous games. The reason for this is that there's a certain character in the game that isn't as grim as the usual cast of war-hardened soldiers, and the apathetic Pantheon. Despite only composing fifteen minutes worth of new material, the game's sound should have enough freshness to it. This has to do largely in part by a huge effort to remix old tracks; they take the old tracks apart, restructure them, and then use the various arrangements in a way that ensures each scene has its own unique sound. He also calls the music on Chains of Olympus "more intimate" than what we've seen previously.

Marino also revealed some interesting trivia about the God of War series. For example, did you know that Kratos was originally supposed to be named Dominus? Now how about the future you ask? Marino shared that he will be indeed working on God of War III for the PS3. Another epic game, another rocking music score. There are a lot of other alluring tidbits in the interview, so why not have a read of it for yourself?

In this article: gerard-marino, gerardmarino, god-of-war, godofwar, ready-at-dawn
All products recommended by Engadget are selected by our editorial team, independent of our parent company. Some of our stories include affiliate links. If you buy something through one of these links, we may earn an affiliate commission.
Share
Tweet
Share