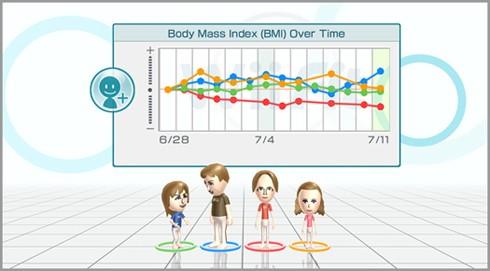 Video games can occasionally be the source of some pretty disheartening self-realizations -- like the time Rock Band revealed that you've been lied to your entire life about your angelic singing voice, or when Vampire Rain made you realize that you have incredibly poor taste in video games. However, something tells us these revelations are a bit less heartbreaking than those about to be unleashed by Nintendo's latest best-seller, Wii Fit -- especially when the heart in question is the fragile, butter-soaked heart of an overweight child.

Or an average-weighted child, for that matter. You see, Wii Fit measures the user's Body Mass Index (BMI), a weight/height ratio commonly calculated by physicians, though the use of BMI measurements in children is criticized by many dietitians for its frequent inaccuracy. Nintendo recently issued an apology following an incident involving the hurtful labeling of a "solidly built" 10-year-old girl. So, it's like an electronic, $90 version of our fifth-grade gym teacher? We're sold!

In this article: apology, bmi, bodymassindex, fat, nintendo, overweight, weight, wii, wii fit, wii-fit, WiiFit
All products recommended by Engadget are selected by our editorial team, independent of our parent company. Some of our stories include affiliate links. If you buy something through one of these links, we may earn an affiliate commission.
Share
Tweet
Share