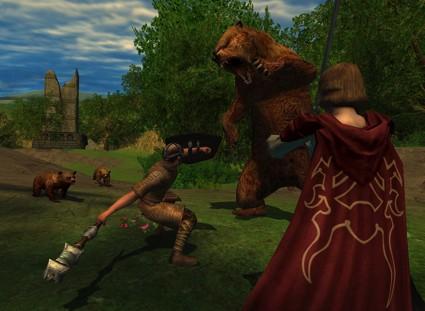 Part of the genius of Lord of the Rings Online is how Turbine managed to wrap seven genres into one game. No, I am not talking about their Web games promoting the Mines of Moria. Rather, I am talking about how utterly different the play of each class is while being in the same environment. This is great because it aids the replayability of a game whose content, shall we say, lends itself to considerable replay for the committed player.

Each class is its own game – so much so that each actually typifies not merely a different RPG character type, but actually completely different genre of gaming.

Can you match the genre to the character class?

Hunter: The first person shooter class of LotRO. Over time, Hunters get various bows with various damage types, skills with various effects, and modifying oils and chants, which is not unlike choosing between and assortment of machine guns, flame throwers, missile launchers, plasma guns, and even the occasional BFG shot. In fact, it's close enough that there are times where I wonder what my Hunter is doing on an outcropping in the Ettenmoors without a clip of rocket-propelled grenades attached to his longbow. Then again, I am sure there are days everyone feels that way.

Champion: The arcade fighter class of LotRO. To Champions, every problem just requires more key mashing in the right combos to dump their special moves and damage onto the enemy up until the point where they are killed (which happens quite often). LotRO comes with two flavors of Champions – the heroes of the people who know when to stop inflicting damage or suicidal, aggro-stealing jackasses who don't. Since Champions don't come with their own coin slots for additional credits to keep fighting, the class does face certain limitations unless supported by a healer, but think of how much money Turbine could make if they could implement a coin slot credit system for Champions...

Guardian: The Breakout 2000 class of LotRO. With good gear and attention, you are the mighty focal point of your game, knocking out brick after brick with clever play and hardheaded determination, drawing attention to yourself, and controlling the board. Without good gear, you're playing a Warrior in EverQuest without the inherent aggro-grabbing ability. Moral: have good gear.

Minstrel: The real-time strategy class of LotRO. Sure, you don't get to build the other characters unless you have some wicked professional skills, but the Minstrel does get to coach and bully them in how to stay alive, from choice of targets and pulls down to harassing them about their trait choices. After all, you want your lovely little units paying attention to their duties (especially when they're gold farming for you) and staying away from the all-important main base (you). Besides, your rapidly moving attention and sustaining of hit points in battle makes you the de facto the Keeper of Middle-earth's Darwinism.

Only you can cull the unworthy from the herd. Only you.

Lore-master: The turn-based strategy class of LotRO. For Lore-masters, all things are done in their time and in their set order, with all the care and precision that whatever you are drinking allows. Don't like the way the game is going? At level 50, LMs have as many as six ways to pause the game. Not for long, depending on how things are going, but then, how long does it take to get a refill?

Burglar: The felonious, first person sandbox class of LotRO (think Thief, Deus Ex, or at a stretch, Sid Meier's Pirates! -- and damn, I'm showing my age). Bilbo aside, the Burglar has some nice bonuses for a groups when it comes to starting team special attacks (called conjunctions), but most of the time, the rest of the party is there to just get in your way. This class is the king of set up, cut up, jack up, and walk out. Your face appears next to "handling the situation" in an elvish phrase book, provided that the situation doesn't last too long (and if you're running the show, it won't). Such a shame that the rest of the party will die of boredom if you're running things you way, but that's their problem.

Captain: The MMO class of LotRO. Mind you, Captains do resemble Sonic the Hedgehog insofar as they relentlessly cover maps, grind, get/give periodic buffs (if only jumping through the rings over quest givers heads gave experience points!), run quickly, and otherwise lack a bit of depth. However, their job as a buffer and backup everything is to help all other players do their job better than they might otherwise, and that is as massively multiplayer of a job as it gets. Three cheers to the captains! May the Mines of Moria release finish that depth of ability you've been missing.

All this said, Turbine has mentioned that two new classes will come out for Mines of Moria: the Rune-master and Warden. What games will be associated with these classes? Perhaps some irresponsible and likely inaccurate speculation can give us the answer*:

Rune-master: The Tetris class of LotRO. In my mind, the Rune-master will collect combinations of runes (possibly from the forehead of the Witch King of Angmar) and stack up them up in clever ways and shapes, causing walls to collapse and a strange, pleasurable addiction to grip the player and any other players in the area. Innovative players, depending on their trait slotting, will make other variations of the runes, occasionally getting extra experience points for clever usage and "triple word scores."

Warden: The anti-cheating tool class of LotRO. Ported over from Blizzard, this character class will have the unique ability to ticket players for sending monsters into anti-exploit mode, causing them to be extremely unpopular except for, ironically enough, the griefing crowd getting to express themselves on the side of the "good guys".

* Disclaimer: should either of these predictions come remotely true, I will pass out in shock.
In this article: anti-cheating, arcade-fighter, blizzard, breakout-2000, dawn-of-war, deus-ex, doom, everquest, feature, featured, first-person-shooter, lord-of-the-rings-online, lotro, mmorpg, real-time-strategy, sandbox, sid-meiers-pirates, sonic-the-hedgehog, street-fighter, tetris, Turbine, turn-based-strategy
All products recommended by Engadget are selected by our editorial team, independent of our parent company. Some of our stories include affiliate links. If you buy something through one of these links, we may earn an affiliate commission.
Share
Tweet
Share