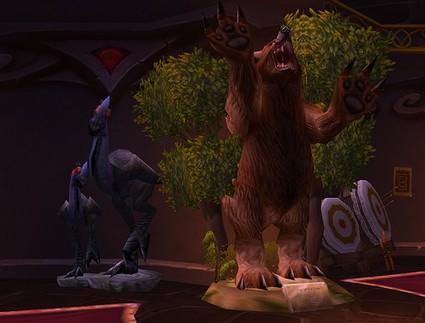 The author of "Warcraft and Other Hooha" read on the Lord of the Rings Online's site that there are taxidermists in game who will mount and show off your kills, and wondered why the same thing wasn't going on in Azeroth. It seems silly at first, but there's actually a lot of precedent -- they collected all the current taxidermy in Warcraft, and the case is pretty convincing. Clearly someone is stuffing and mounting animals in Azeroth.

Of course, as in LotRO, this is a feature that would go hand-in-hand with player housing, so we shouldn't expect to see one until we've gotten the other (and odds are that we won't see player housing anytime soon, though guild housing is another story). Not everybody would want dead animals adorning their walls (Druids probably wouldn't appreciate having that bear around), but what better way is there for you to show off what you've taken down out in the wild?

[Via Mania]
In this article: animals, lord-of-the-rings-online, mounting, player-housing, taxidermists, taxidermy, titles, warcraft-and-other-hooha
All products recommended by Engadget are selected by our editorial team, independent of our parent company. Some of our stories include affiliate links. If you buy something through one of these links, we may earn an affiliate commission.
Share
Tweet
Share