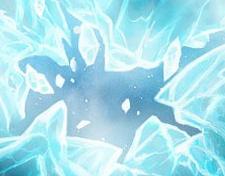 This time, a large chunk of the ice in the middle of the picture seems to have broken away. Unfortunately, we still can't make out much of anything through the ice, though we've already had a tipster or two comment to say that it may be the night sky. If so, does that mean we're inside some sort of icy tomb or cavern looking out? There's also a new rune located in the bottom left hand corner of the breaking ice. The meaning of the new rune is still up in the air. Diabloii.net points out that it looks a lot like a Protoss symbol found on the official Starcraft 2 site.

You can see the image, as well as the newest piece of that strange purple monster image, in our splash screen gallery below. As mentioned, a new piece of the strange purple monster image has popped up as well. This time, it's entitled 23.jpg. If we follow the pattern of the two previous pieces, that would translate to the letter "W." This shoots down the theorists who were hoping that the file names would spell out "Diablo" when converted. Right now, they spell "DOW." or "WOD." Of course... WOD? World of Diablo? Could we be looking at the next-gen MMO Blizzard's been hiring people for?

This is also a good time to mention the two schools of thought on the whole purple monster issue. Some people are claiming that the monster is a purple walrus, which is apparently the trademark image of Michael Dashow, a 3D artist who worked extensively on Diablo 2. Other people are saying that the monster is obviously a Jormungar -- and I have to admit, that crest of hair on top of 04.jpg does look suspiciously like the crest of hair on top of a Jormungar. Then again, diabloii.net's mockup of how the pieces might connect looks a bit like some sort of purple penguin.

As well, the Master CSS file has changed again. This time, the world of the day is "icy." It's more cold imagery this time around. Could all this ice image just mean that we're only looking at a WoTLK Beta announcement after all? Check the pictures, check some of the insightful comments from our readers in the last article, and judge for yourself, and then join the conversation here in the comments.

Edit: The splash screen has changed again. Check here for news and analysis of the updated image as of June 26th.

Edit: Check out the changes for June 27th right here.

In this article: 04, 04.jpg, 23, 23.jpg, blizzard-splash-screen, d, diablo, diablo-2, diablo-3, diablo-ii, diablo-iii, ice, icy, jormungar, joystiqfeatures, michael-dashow, o, rumors, speculation, splash-screen, starcraft-2-protoss, teaser, tweet-this, w, wod, world-of-diablo, worldwide-invitational, wwi08
All products recommended by Engadget are selected by our editorial team, independent of our parent company. Some of our stories include affiliate links. If you buy something through one of these links, we may earn an affiliate commission.
Share
Tweet
Share