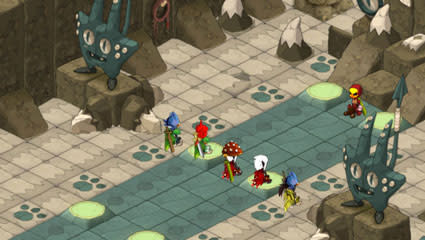 For those of us not fortunate enough to be part of the Wakfu closed beta, the game has remained something of a mystery. A beautiful, sexily-rendered 2D turn-based mystery, but a mystery nonetheless. We've seen a few screenshots, we know its release is going to be accompanied by an animated series, and we know the game is going to be in the same general vein as sister series Dofus, but beyond that it's still a little vague.

The marketing team over at French developer Ankama Games has passed a trailer our way that really highlights the synergy between the animated series and the game proper. It also puts the game engine into motion, giving us a better idea of what the gameplay might be like, including some glimpses of player-to-player interaction, albeit in French. Check out the video after the jump if this sounds like it might possibly be your cup of tea.

In this article: 2D, animated-series, ankama-games, dofus, trailer, turn-based, video, wakfu
All products recommended by Engadget are selected by our editorial team, independent of our parent company. Some of our stories include affiliate links. If you buy something through one of these links, we may earn an affiliate commission.
Share
Tweet
Share