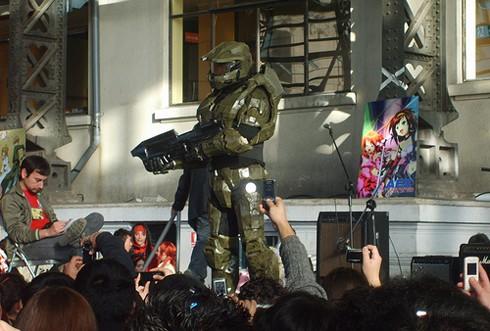 Following the "Halo Universe" panel at the San Diego Comic Con 08, Eurogamer had a chance to speak with former Bungie content manager Frank O'Connor, who now works with Microsoft to manage the Halo franchise. During the interview, O'Connor stated that a "HaloCon" (that's Halo Convention, for the contextually impaired) is a definite possibility, adding, "Bungie has done fanfests at E3 and it would be lovely to see something bigger, something more ambitious in the future." In addition, we figure a Halo-based expo would also prove an appropriate time to follow through on certain... engagements.

Eurogamer did not let Bungie's seized E3 announcement go unmentioned, and O'Connor responded with an uncrushed spirit, explaining that "someone, somewhere decided strategically that another time is better, and it will be, and there's going to be an announcement and it's going to be awesome." This could mean that they actually know when they'll be following through on their promised E3 megaton, and (if you can wrap your mind around this) -- that they've yet to announce when they're going to announce what they're going to announce.

In this article: breakingnews, bungie, bungiegate, comic-con-2008, convention, frank-o-connor, halo, halocon, microsoft
All products recommended by Engadget are selected by our editorial team, independent of our parent company. Some of our stories include affiliate links. If you buy something through one of these links, we may earn an affiliate commission.
Share
Tweet
Share