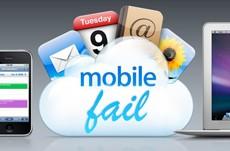 Not that anyone could really dance around the facts of the matter at this point, but in an email to Apple employees sent today, apparently Steve said, "It was a mistake to launch MobileMe at the same time as iPhone 3G, iPhone 2.0 software and the App Store. We all had more than enough to do, and MobileMe could have been delayed without consequence." Apple exec Eddie Cue appears to taking the much maligned service under his wing (as well as the App Store, adding to his original gig as VP of iTunes), hopefully making good on the other bit in El Jobso's email where he resets Apple's call to action on .Mac's replacement: "The MobileMe launch clearly demonstrates that we have more to learn about Internet services. And learn we will. The vision of MobileMe is both exciting and ambitious, and we will press on to make it a service we are all proud of by the end of this year." We'll see about that!

Update: You can check out the actual here email here, if you're looking to see how Jobs uses em-dashes as bullets.

In this article: eddie cue, EddieCue, mobileme, steve jobs, SteveJobs
All products recommended by Engadget are selected by our editorial team, independent of our parent company. Some of our stories include affiliate links. If you buy something through one of these links, we may earn an affiliate commission.
Share
Tweet
Share