Acer claims Aspire 5738DG as its first 3D laptop, we worry over the future of things 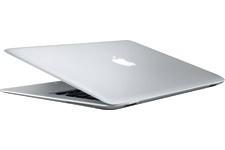 PhoneNews claims they can "confirm" that Apple will speed-bump the MacBook Air with a Penryn-class Intel Core 2 Duo processor, increasing the clock speed to 2 GHz and up. The story also notes that, since the processor requires more power, the Air will ship with a higher-capacity battery and 60-watt power adapter.

Engadget goes further, noting that clock speeds could (theoretically) reach 3.06GHz. Also, they speculate that the Air could feature improved integrated graphics if it adopts the Intel Centrino 2 chipset.

Alternatively, Engadget notes that Intel plans to release several flavors of low-voltage Penryn chips in September, which might indeed be slated for the MacBook Air. Using these chips, however, would decrease the power requirements noted by PhoneNews, not increase them.

PhoneNews says national retailers have been alerted "to be prepared for the upgrade." This may be part of several laptop announcements rumored to be happening in September.

In this article: centrino 2, Centrino2, intel, macbook air, MacbookAir, penryn, phonenews
All products recommended by Engadget are selected by our editorial team, independent of our parent company. Some of our stories include affiliate links. If you buy something through one of these links, we may earn an affiliate commission.
Share
Tweet
Share