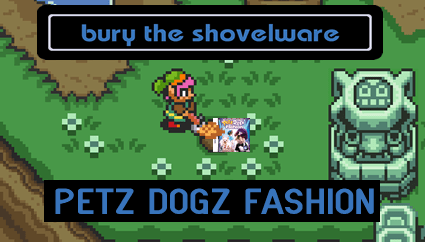 This title seemed to be doomed from the beginning: it's made by Ubisoft, it's a pet simulator, and it uses Z's where there should be S's. But you may be surprised to learn that this actually isn't quite a terrible game. Yet it's still shovelware. So how does one achieve this seemingly contradictory state? Last week, we discussed imitation. While Best of Tests DS was clearly trying to bite off some of the Brain Age momentum, its limited content and awful design made it a lackluster game. Thus, it was easily identified as shovelware. But what does one do when a seemingly good game is, at its core, nothing more than a simple clone of an existing title (albeit a well done clone)? Here's my take on things.

00:00:03 - At the title screen, there is a loud dog-calling whistle. After giving me a dirty look from the couch, it's apparent that my real-life dog does not approve of this game. And as they say: dogs are a good judge of character. The intro features 3D dogs prancing back and forth. They are very Nintendogs in design ... surprise!

00:00:45 - The main character is reciting her life story to me. "I live here in Doggerville." Geez, they really went all-out on that one.

00:01:13 - This is creepy. The main character, an 11 year-old girl, has informed the audience that she is home alone. Suddenly, the doorbell rings. Without warning, in comes the older and questionable "Mr. Bear." The main character informs me "This is Bernie Wood, my Dad's distant cousin. I call him 'Mr. Bear.'" Uhh, yeah, that's adorable. Now go wait outside until my parents get home.

00:02:01 - After some more painful dialog, the girl's parents come home (thank goodness), and Mr. Bear informs us that he's here to sell puppies that he has sitting in his car. What, does he offer candy to kids who hop inside his van as well? I'm instructed to pick a dog. WOW. As I'm prompted to pick a breed of dog, a picture of the puppy spins around. And let's just say that they got most of the details correct ... including the, err ... "waste disposal point" of the animal.

00:05:01 - The game isn't bad. I guess it's what you would call "solid," but it's not quite worth playing through. Have you played Nintendogs? Yes? Then you've played this game. No? Then you won't like this one either.

How exactly does one rate something that is trying very hard to be something else? Do you rate it based on how well it stays true to the original? How different it tries to be? Do you simply label it CRAP and move on? This is an interesting development. I've swooned over Contra 4 since its release. Yet one could make the fairly reasonable argument that Contra 4 is simply trying to be Contra III: The Alien Wars. Indeed, the gameplay is nearly identical. There are improvements and small evolutions that weren't present in the original title, but the same could be said for Petz Dogz Fashion's additional mini-games and dress up modes. Is it simply an issue of name and licensing? Had this exact same game simply had the logo replaced with the words "Nintendogs 4", would I be okay with it?

There's an old saying that goes "the whole is greater than the sum of its parts." For our purposes, the phrase should be modified to "the whole is not necessarily equal to the sum of its parts." For example: Super Metroid is an amazing game. I feel that it's a 10/10. Yet if Nintendo were to release the exact same game on a disc today and sell it in retail stores for 50 dollars, it would not be acceptable. But in theory, that seems like a fair price to play for an allegedly perfect game. So where does the disconnect happen? For an existing example, see the Virtual Console. Though it's hard to gather aggregate scores from older games, it's no surprise that many titles receive lower scores today than they did in their original debut. This is my point: There is always more to consider about a game that the contents sitting in front of you. One must fully realize the gaming medium as a whole before they make judgements on any individual game. Then the goal is to determine not only what the currently examined game does well, but how it compares to those who came before it.

For all intents and purposes, Petz Dogz Fashion is a Nintendogs clone. Sure, it's a well-made clone. It's a clone that fans of Nintendo's pet simulator will likely enjoy. But it is still and will always be a clone. This is taken into consideration when we label Petz Dogz Fashion as shovelware.

In gaming, the term shovelware refers to any game in which time and effort were eschewed in favor of turning a quick profit. Bury the Shovelware takes a closer look at these titles, typically those that inhabit the lower end of metascores. It attempts to: 1) find out where and how the developer went wrong 2) identify common traits present in most shovelware 3) measure how long the game can be suffered.
In this article: dogz, joystiqfeatures, pets, petz, shovelware, ubisoft, virtualpet
All products recommended by Engadget are selected by our editorial team, independent of our parent company. Some of our stories include affiliate links. If you buy something through one of these links, we may earn an affiliate commission.
Share
Tweet
Share