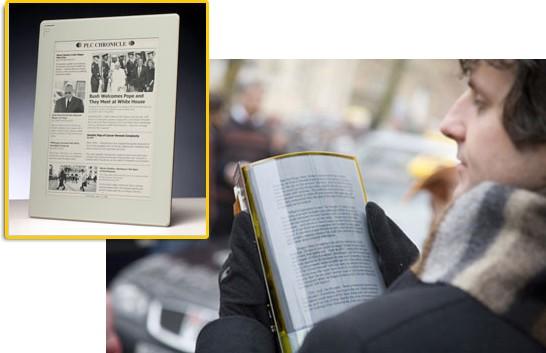 Later today, Plastic Logic will be showing off its new e-newspaper reader (name, undecided) for the first time. The black and white, E Ink device features a wireless link to download content, room enough to store "hundreds of pages of newspapers, books, and documents," and a display more than twice the size of the wee Kindle while suffering just half the ugly. Better yet, the device is said to use "flexible, lightweight plastic" rather than glass resulting in a reader about one-third the thickness of the Kindle at about the same weight -- the reader itself (pictured left) looks rigid compared to that flexible display Plastic Logic has demonstrated in the past. Expected to go on sale during the first half of 2009 with more details, including which news organizations will feed information to the reader, promised for CES in January.

In this article: e book, e ink, ebook, EInk, kindle, newspaper, plastic logic, PlasticLogic
All products recommended by Engadget are selected by our editorial team, independent of our parent company. Some of our stories include affiliate links. If you buy something through one of these links, we may earn an affiliate commission.
Share
Tweet
Share