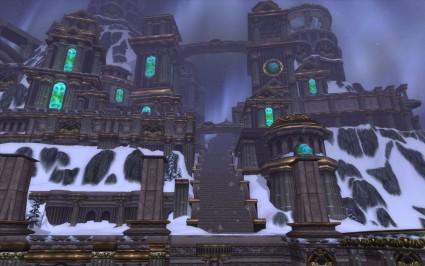 We all know how this goes by now, so let's jump right in. If you don't know how this goes, click back through a few of the previous editions of Ask a Beta Tester. You'll catch on, I'm sure.
Xaktsaroth asked...

How does reputation work in general in Wrath? Are there turn-in quests? Rep for killing Mobs? Quested Rep? If you just quest, how far along does that reputation take you?

It's a little different for every faction, but I can say that I have not yet seen turn-ins like we had to do for the Aldor or Scryer. Most of the rep gains seem to be via quests or dungeons depending on the faction. On beta, I'm nearly Exalted with the Valiance Expedition exclusively from quests. Strangely, I'm Neutral with the Kirin Tor as of a couple of beta patches ago when I had been Friendly. Curious! Either way, I haven't seen much in the way of rep via quests from them. You'll probably need to do dungeons or some other thing.

It's going to vary from faction to faction, they're not all the same. Some are quest heavy, some are not. If you prefer dungeons, however, just get to Friendly with someone, pick up their tabard, and you can get rep with them in any dungeon you want.

With the adjustments made to healing, is it still possible to heal 5-mans while leveling with a non-healing spec e.g. a shadow spec priest healing a 5-man dungeon?

Absolutely. I've healed every 5-man in Wrath of the Lich King as a Shadow spec at least once. I respec for Heroics and Raids just because it only costs 1 copper to do so I have no idea how off-specs hold up there, but they're just fine in 5-mans. You really should not have any problems. This is assuming, of course, your group knows how to play. An off-spec Healer probably can't carry a terrible group on their own.

The only people that will have problems with it, I think, is Ret or Prot Paladins, but I can't say that from experience. I just don't think they have the tools to do it, but I would absolutely love it if someone proved me wrong.

Do the 3 person mammoths (such as the 20k version from Dalaran) involve any speed increase beyond the normal 100% epic ground speed increase?

If one is determined to pick up mining as the gathering profession, does blacksmithing or engineering seem to be more rewarding in Wrath?

What do you think would be more fun? Both have advantages, both have fun things you can make. Blacksmithing has epic BOE weapons, sockets, and some pretty decent gear. Engineering has rocket boots, motorcycles, and mote/crystallized-whatever farming. Both are cool. It's just preference at this point.

If I spent a few days raping and killing in Booty Bay to get the Bloodsail Admiral title, will my resulting hated reputation amoung the various Goblin factions cause me to get killed on sight at an important quest hub in Wrath?

Nope. The major Goblin town in Northrend, K3, has no faction alignment.

How are boomkin shaping up? What I really want to know is will entangling roots be a good enough cc to get us into any 5 man we want like mages?

I can't pretend to be the authority on Druid DPS but it seems okay? They kill things pretty well. As far as crowd control, Boomkin are better at CCing melee than casters, because casters don't really care if they're rooted or not. A fun trick I've seen people use, though, is purposely get aggro on a caster, Line of Sight them around a corner, and root them there where they can't see anybody. Then you rejoin the fray until the roots let up. Still, their CC is much stronger against melee mobs. Between Roots and Cyclone you shouldn't have any problem qualifying as valid CC in a 5 man if you're good at playing your class.

I don't have an exact figure to give you, but I can say this much: It's bigger than Outland, but 20-30 times bigger is just pure nonsense.

The Wrath of the Lich King beta is in full swing, and the WoW Insider crew is here to sate your curiosity with Ask a Beta Tester! Leave your beta questions in the comments and we'll do our best to answer 'em! And if you can't get enough Wrath, don't forget to check WoW Insider's Wrath Roundup page for anything we haven't answered here!
In this article: aabt, ask-a-beta-tester, balance, cyclone, entangling-roots, k3, kirin-tor, reputation, tweet-this, valiance-expedition, wrath-beta
All products recommended by Engadget are selected by our editorial team, independent of our parent company. Some of our stories include affiliate links. If you buy something through one of these links, we may earn an affiliate commission.
Share
Tweet
Share