Geeks are using science to make the best chocolate ever

On this day in 1996, Apple acquired NeXT (Updated) 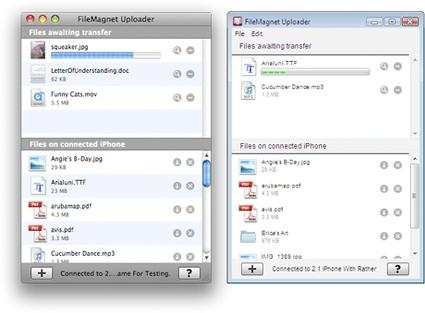 It kind of sounds like a developer's dream: create an app in Cocoa that automatically works on Windows, too. But that's what Cocotron promises, and the folks at Ecamm say the dream is there, even if it requires a lot of elbow grease. They tried using Cocotron to port an app called FileMagnet, and two months after they started, they say they did it. You can see the results above, and as they say, "Visual Studio was never opened."

But of course it wasn't exactly one-click. They had to implement a number of Apple-specific methods, and there were UI bugs, strings support, and dreaded Vista compatibility to work out. But the good news is that Cocotron is all open source, and from what the Mac Daddies say, the devs working on the project are super helpful and supportive. So, not only is it getting better every day, but every bit of implementation that gets done is something that won't have to be repeated. Sounds like a lot of "fun" (for varying values of "fun" of course) for developers to be had here.

The lines between Mac and PC, no matter what the commercials say, are blurring more and more every day, and this could turn out to be a way to develop in an environment as welcoming as Cocoa, and then bring programs back into an environment as widespread as Windows.
In this article: cocoa, development, ecamm, mac-daddies, open-source, platform, windows
All products recommended by Engadget are selected by our editorial team, independent of our parent company. Some of our stories include affiliate links. If you buy something through one of these links, we may earn an affiliate commission.
Share
Tweet
Share