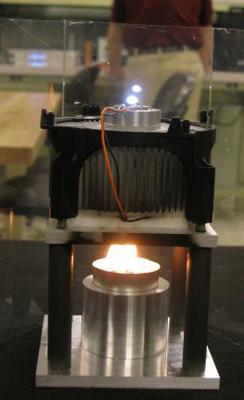 Not that waste heat in general hasn't been repurposed for non-wasteful activities before, but researchers at Doshisha University are now edging ever closer to making useful the previously annoying thermoacoustic phenomenon. For those not really tied into the science realm, said phenomenon is a nonlinear one in which "heated air autonomously transforms into sound when passing through small mesh holes in a wire sheet." Gurus are now developing a cooling technology that would have heat converted to sound, where it would then be transferred through a tube and reconverted into heat; furthermore, other whiz-kids are looking to generate actual electricity from the racket. In related news, the thermoelectric conversion is being used to transform waste heat from candles into energy for LEDs, which would emit more light than the candle powering it. Pop on past the break for a demonstration of the former.

In this article: cooling, electricity, energy, heat, LED, light, lighting, science, sound, thermoacoustic, thermoacoustic phenomenon, ThermoacousticPhenomenon, thermoelectric, thermoelectric conversion, ThermoelectricConversion, video, Waste heat, WasteHeat
All products recommended by Engadget are selected by our editorial team, independent of our parent company. Some of our stories include affiliate links. If you buy something through one of these links, we may earn an affiliate commission.
Share
Tweet
Share