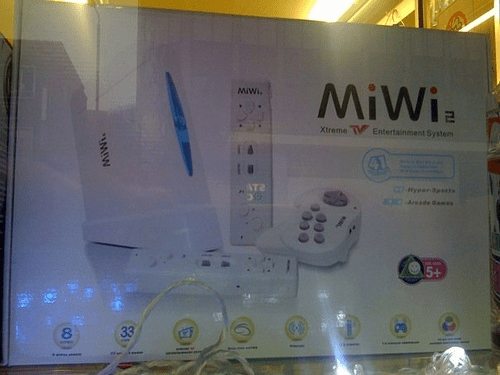 We're pretty sure that Nintendo doesn't have anything to fear when it comes to the MiWi2, a Wii knockoff that was first spotted by Engadget Korea back in June. However, we were surprised to see the fake on sale somewhere outside of Asia -- or really anywhere for that matter. Yes, unknowing parents may have accidentally snagged one of these rip-offs instead of the real deal at an unnamed London shop, but rest assured, your little darlings probably let you know once they unwrapped it and realized you got them the wrong damn thing.

[Thanks, Kasam]
In this article: fake, fakewii, keepin it real fake, KeepinItRealFake, kirf, knockoff, miwi 2, miwi2, nintendo, ripoff, wii, wiiknockoff
All products recommended by Engadget are selected by our editorial team, independent of our parent company. Some of our stories include affiliate links. If you buy something through one of these links, we may earn an affiliate commission.
Share
Tweet
Share