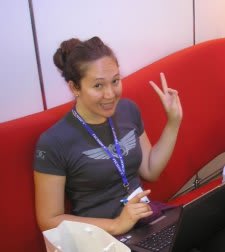 The third episode of the Official NCsoft Europe Podcast has just been released, and in it, we get treated to a bit of a pace change. Avatea, NCsoft Europe's Community Team Lead for Tabula Rasa hosts this show while interviewing three of the main developers for the game: Producer Starr Long, Lead Designer Tom Potter and Art Director Victor Meinert. Luckily for those of us Rockjaw fans out there, he is not completely left out of this one!

This 40-minute show gets into the minds of these developers, and lets us know a bit more about what it's like to work at Destination Games, their visions for the future of Tabula Rasa, the importance of player feedback and much more. We even get a glimpse into the crazy practical jokes the team has played on each other! So give it a listen and don't forget to follow along with the complete episode transcription.

In this article: avatea, destination-games, ncsoft, ncsoft-europe, podcast, rockjaw, tabula-rasa, tr
All products recommended by Engadget are selected by our editorial team, independent of our parent company. Some of our stories include affiliate links. If you buy something through one of these links, we may earn an affiliate commission.
Share
Tweet
Share