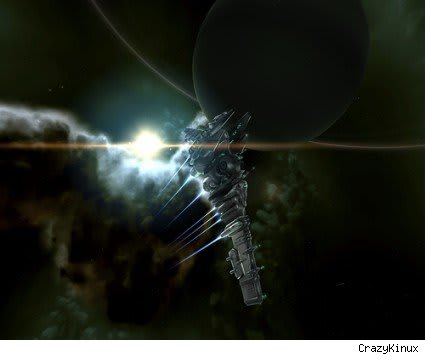 Factional warfare became a part of EVE Online in the Empyrean Age expansion, which ushered in a time of backstory-driven militia conflict for players aligned with one of the four races of New Eden. What promised to be a new avenue for EVE's roleplaying community ended up being inaccessible to roleplaying alliances. CCP stipulated that alliances cannot enlist with factional militias, as their sheer numbers could streamroll their opposition and create overwhelming odds for the disadvantaged side in the conflict.

The only recourse EVE's alliances have is to form splinter corporations outside of the alliance, for the sole purpose of allying with a given racial faction. That is, until recently. An article from ISD Magnus Balteus, one of EVE Online's in-game reporters, states the Star Fraction alliance "has openly declared war on corporations that have joined the Caldari milita; the State Protectorate. For over a month, Star Fraction has been selectively targeting the corporations of fleet commanders in the Caldari militia."

So while large roleplaying alliances cannot directly intervene in the factional struggle, they've found a way to get involved peripherally. This also means that factional militia-aligned corporations find themselves under fire in roleplay scenarios they hadn't envisioned.

The actions of the Star Fraction alliance have forced two player corporations to withdraw from the Empyrean Age's factional warfare altogether, thus far. Some feel it's tantamount to griefing. Not only do they need to fight both factional enemies of their militia while fending off pirates who capitalize on increased lowsec system populations, now roleplaying alliances target them for their in-game political beliefs.

The coverage of this situation by EVE's Interstellar Correspondents suggests that CCP Games is well aware of the situation and that it falls within the rules of engagement in EVE Online. Peripheral war declarations may well be a dynamic of factional warfare CCP hadn't anticipated, but it has created new roleplaying opportunities -- only for some more than others.

In this article: alliances, caldari, ccp, ccp-games, combat, conflict, embedded-reporting, empyrean-age, eve, eve-online, faction, factional-warfare, gallente, game-mechanics, grief, griefing, guerilla-warfare, interstellar-correspondents, isd, jade-constantine, magnus-balteus, militia, politics, pvp, races, roleplaying, volunteer
All products recommended by Engadget are selected by our editorial team, independent of our parent company. Some of our stories include affiliate links. If you buy something through one of these links, we may earn an affiliate commission.
Share
Tweet
Share