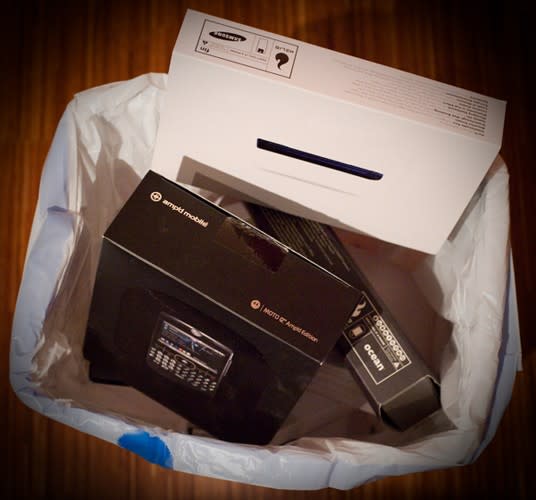 Back in the early days of Engadget, everyone -- including us -- thought mobile virtual network operators (MVNOs) were totally poised to be the next big thing. And why not? You get to be a wireless carrier without having to operate your own infrastructure (which is by far the most expensive, difficult part). Just what the doctor ordered for the big, stodgy wireless carriers, each struggling to balance differentiating themselves while trapping their customers in their walled content and services gardens.

Little did we all know that the differentiation most of these MVNOs had in mind was slapping their lame brand on some existing phone that people could get sooner, cheaper, and often with a better plan on one of the major carriers. Even Helio, the one MVNO that managed to keep gadget nerds' attention for more than 30 seconds, couldn't ride the Ocean to the land of success, writing off its half-billion dollar 2.5 year run for $39m in Virgin Mobile USA stock.

Let's take a look at the last five years in dead American MVNOs. For a graveyard of well over billion dollars, you'd sure think it wasn't so damned shabby.

Amp'd Mobile
Began service: December, 2005
Ended service: July, 2007
Network: Verizon
Amount invested: reportedly $350 - 400m+
Backgrounder: Despite backing by MTV and Universal Music Group (and a ton of VCs), CEO Peter Adderton managed to run this MVNO straight into the ground in little more than a year. It didn't help that the people running Amp'd couldn't get thousands of their "customers" to make good on their bills, strangling what little income the company did have. Way to go. Amp'd's mobile content still lives on, though -- ever catch Little Bush on Comedy Central?

Disney Mobile
Began service: June, 2006
Ended service: December, 2007
Network: Sprint
Amount invested: $150 million (Mobile ESPN and Disney Mobile combined)
Backgrounder: The second half of Disney's dynamic duo of doomed MVNOs, Disney Mobile targeted families looking to hook up their kiddies with phones that could be easily tracked, monitored, and locked down from afar. Unfortunately for Mickey and the gang, the service came online just as virtually every major carrier got hip to the trend and started offering family-friendly features and services of their own. Combine that with a selection of outright dismal phones, and failure in the marketplace was pretty much guaranteed from the very first rendition of "It's A Small World".


Helio
Began service: May, 2006
Ended service: June, 2008
Network: Sprint
Amount invested: $560m+
Backgrounder: Perhaps the only MVNO we saw with a cogent business concept: sell US users all the crazy, über-sophisticated South Korean phones they've been missing out on. Unfortunately, they never fully nailed the phones (which few phones they did sell over the years), skipping an obvious opportunity to sell proper smartphones. And the MySpace mobile / don't-call-it-a-phone marketing didn't really help them win over the power-user set -- nor did the iPhone. Naturally, we're sorriest to see Helio go, but we won't deny that the company had a number of serious, if ultimately preventable flaws.


Mobile ESPN
Began service: November, 2005
Ended service: December, 2006
Network: Sprint
Amount invested: $150 million (Mobile ESPN and Disney Mobile combined)
Backgrounder: It's hard to say what exactly doomed ESPN's foray into the phone game: its first handset's staggering launch price of $499, the anemic selection of devices, or the fact that a sports television network probably has no business trying to offer cellphone service in the first place. Mobile ESPN's claim to fame was a selection of sports-themed media and services for its handsets, offerings that could be added just as easily to... oh, any phone on any carrier. In fact, that's exactly what ESPN has gone on to do, bundling its brand through Verizon's contact stack -- a much less pricey venture, we bet.


Sonopia
Began service: April, 2007
Ended service: April, 2008
Network: Verizon
Amount invested: $21.5+ million
Backgrounder: Sonopia billed itself as an "MVNO of MVNOs," offering small business, organizations, and individuals the opportunity to create their own virtual networks running on Verizon's backbone and get kickbacks for every subscriber they managed to sign up. Problem was, the business model failed somewhere -- let's be honest, it's probably pretty tricky to get people to sign up for an Omnicron Delta Kappa cellphone, especially when a RAZR is the best model offered -- and the company went into hiding in April of this year. As of now, Sonopia's CEO claims that it's waiting out the storm for a market friendler to virtual networks while pursuing some opportunities outside the US, but we think they could be met with considerably more resistance pulling VC cash the second time around.


Voce
Began service: November, 2005
Ended service: February, 2008
Network: AT&T (Cingular)
Amount invested: Unknown
Backgrounder: We don't know what's more memorable about Voce -- that they thought they could get away with reselling AT&T service for hundreds of dollars a month (with a $500 starting fee), or the fact that they double-billed their customers right before totally shutting down their service, call centers, and subscribers' phones completely and totally without warning. If Voce were a person, we'd pin it down and slap it around like a bully.


XE Mobile
Began service: April, 2006
Ended service: December, 2007
Network: AT&T (Cingular)
Amount invested: Unknown
Backgrounder: You know, to this day we still don't really know what the hell XE Mobile was all about. They were supposed to be catering to the college student demographic -- but really, who isn't?


Regional MVNOs worth a mention
Embarq: Shortly after Sprint tapped spin-off Embarq's head Dan Hesse to become its own CEO in early 2008, the decision was made to shutter the wireless service. Not many were surprised.
Qwest: Former Sprint MVNO that, after years of quiet service shuffled out of the wireless space earlier in 2008 after giving up its wireless business to Verizon for a "quadruple-play" offering.

In this article: features, mobile, mvnos
All products recommended by Engadget are selected by our editorial team, independent of our parent company. Some of our stories include affiliate links. If you buy something through one of these links, we may earn an affiliate commission.