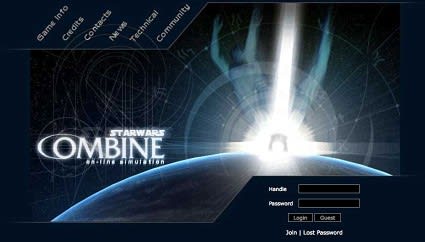 Welcome to the first installment of Indievelopment, where we give some love to the often-overlooked field of independent MMO development. For our inaugural post, we'll take a look at Star Wars Combine, a free MMO based in the Star Wars universe. Played entirely through your browser, SWC is available to Windows, Mac, and Linux users.

We spoke with Sorel Kaar, PR Director for Star Wars Combine about this intriguing title, its history and development, and what new players might expect to experience when trying this game out. Read on for the full interview, with in-game screenshots.

When and how did Star Wars Combine begin?
Star Wars Combine was a project that officially started on the 3rd of December in 1998. The idea was based on a game that existed between the mid-90s and Summer, 1998 known as Star Wars Simulation (www.swsim.com) whose Sim Master suddenly disappeared and the servers shut down soon after. Needless to say this left a small yet loyal community stranded and three of these players decided to create their own version of the game that evolved a lot through the years and took its own path. One of the three was the current Sim Master of Star Wars Combine, Jehan "Veynom" Snyers d'Attenhoven from Belgium. He laid out the foundations and all the necessary initial details, together with Frederic "Fizzban" Waymann from Germany, and Mario "PtJedi" Dominguez from Portugal. Out of the three, Veynom remains the active Sim Master overseeing the whole project up to this date.

What's your title and function? How big is the team?
My function in this game is Public Relations Director, and my primary task is to coordinate all related activities within specific Public Relations teams and oversee parts of the game like our Banner Exchange program. Our team is very dynamic and it's hard to talk about any specific size in terms of numbers. There is a handful of core developers that are more steady and have specific access levels as they are working on the game's database and other highly technical aspects of the game. It's important to note that Administration of this game expands beyond this group, as a lot of individuals and small groups contribute small, yet important additions to the game. These inputs span from technical/programming aspects to purely graphic/description improvements. The very important fact remains that this game is not profit-oriented and the entire development group is volunteer-based, which is also one of the reasons I mentioned above that our Administration is very dynamic, as you often see people come and go after they are satisfied with the input they provided.

At what stage of development is SWC?
It would be nearly impossible to indicate at which development state this game is. Compared to games that are coded, boxed, and sold in the stores as a finished product, this game is in constant development. We could just as easily say that this is the final product as we could also say that the game will never be finished, as it is designed to constantly evolve. The fact that Star Wars Combine has been in existence for a decade speaks for itself, compared to a lot of commercial off-sets that see their birth, peak, and sudden decline. I dare say that in this aspect we exceed many, if I may say so, "rivals". One very good indication of stable growth is the fact that our membership base did not jump to high numbers initially and then slowly decreased, but grows slowly with a very stable pace as we've been tracking numbers growing from month to month for years now.

NEXT >>
In this article: featured, indievelopment, interview, joystiqfeatures, lucasarts, star-wars, star-wars-combine
All products recommended by Engadget are selected by our editorial team, independent of our parent company. Some of our stories include affiliate links. If you buy something through one of these links, we may earn an affiliate commission.
Share
Tweet
Share