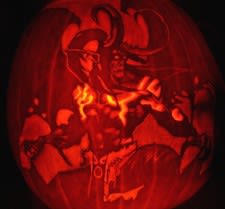 Hallow's End is scheduled to begin in a few hours, and you know we loves us some candy. There's been a big change to the Achievement needed to get the "Hallowed" title (it's actually gotten a lot easier), the Headless Horseman has a new loot table, and -- well, it's been a year since we've seen it anyway, so here's a round-up of WoW Insider's articles on Hallow's End. As an FYI, we're also expecting patch 3.03 to hit alongside Hallow's End, and it should contain a number of bug fixes for problems that have cropped up since 3.02 hit Tuesday and some class tweaks. With that said, nobody's 100% certain of what's actually going to go live, so check back; we should have more information this weekend.

Read on for a guide to the holiday quests, the new Achievement related to the holiday, and some fun stuff you can do ingame til November 1st!

EDIT (11:50 pm EST): we've confirmed a few changes to the holiday with some readers on the EU realms, and I've updated the post.

Some of these quests are actually Achievements in disguise, and for that you'll want our comprehensive guide to the steps you need to take for the meta-Achievement "Hallowed Be Thy Name," which will award you the title "The Hallowed."

Please note that there's been a big, and very welcome, update to this since that article went live; Blizzard has removed A Mask For All Occasions as a prerequisite to Hallowed Be Thy Name, I assume after realizing that collecting all 20 masks was next to impossible. So the two most difficult quests you'll need to worry about for this Achievement will be getting transformed by all the different wands, and getting the Sinister Squashling pet and Hallowed Helm. Still tough, but a lot more doable than trying to defy the statistical odds behind the mask drops.

And, while these aren't quests, don't forget to trick-or-treat at innkeepers all over Azeroth and Outland for various goodies and neat tricks like pumpkin heads, masks, and magic wands. Don't forget to visit the Wickerman Festival, done at 8:00 pm server time outside of Undercity each night of Hallow's End. We also have a few more things for you:
Enjoy your candy, and good luck!
In this article: achievement, achievements, crashing-the-wickerman-festival, hallowed-be-thy-name, hallows-end, hallows-end-2008, hallows-end-guide, headless-horseman, joystiqfeatures, mount, mounts, orphanage, orphans, patch, patch-3.0.3, patches, rotten-eggs, sinister-squashling, stinking-up-southshore, the-power-of-pine, tweet-this, undercity, wicker man, WickerMan
All products recommended by Engadget are selected by our editorial team, independent of our parent company. Some of our stories include affiliate links. If you buy something through one of these links, we may earn an affiliate commission.
Share
Tweet
Share