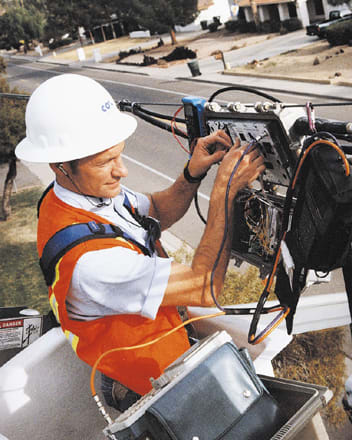 We know, you're just dying to say this is a complete shock, but we're here to inform you that it's not. If you'll recall, Cox dug deep to snatch up a decent block of spectrum in this year's 700MHz auction, and it even went so far as to promise a differentiated product that would eventually integrate with its other content and services. Sure enough, it's keeping its word. After spending $500 million on wireless capacity in its markets, president Pat Esser says it's time to turn things on. By relying on Cox's own 3G network (along with Sprint's, initially), the carrier will offer up an undisclosed amount of handsets that will "include a network address book that automatically synchronizes with home PCs" and allow remote programming of one's DVR. Furthermore, users will be able to access e-mail and voicemail that they receive at home right on their mobile, and ideally, subscribers could watch TV shows right on their handsets. Get ready for an awkward new rival in the wireless space beginning, um, anytime now.
In this article: 4g, cable, carrier, cdma, cellphone, coax, coaxial, cox, lte, mobile tv, MobileTv, mvno, quad play, QuadPlay, quadruple play, QuadruplePlay, service, sprint, wireless
All products recommended by Engadget are selected by our editorial team, independent of our parent company. Some of our stories include affiliate links. If you buy something through one of these links, we may earn an affiliate commission.
Share
Tweet
Share