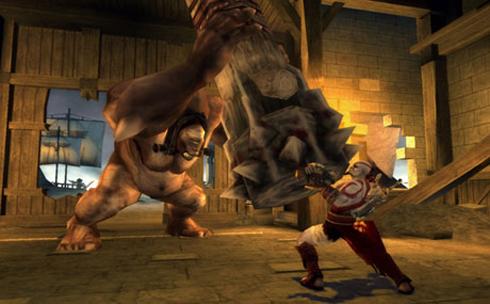 God of War: Chains of Olympus
Albeit quite a bit shorter than the console installments, this portable chapter in one of my all-time favorite series was just as lovely, action-packed, and wonderfully presented as its "big brothers." It's a shame that a PS2 port hasn't been made -- or at least a downloadable version playable on PS3.

Tomb Raider: Underworld
Lara won me back in Tomb Raider: Legend and had me hanging on the hope that her next adventure would also deliver. It did -- not in volume, but in the quality and diversity of the locales and challenges it offered up. (Not to mention it was wicked pretty.) The escape from a sinking ship in the game's first level will probably be on my "best moments" list for a long time to come.

Grand Theft Auto IV
Okay, here's the deal. I know GTA IV isn't exactly a bastion of innovation (and, in many ways, took a step back from previous installments in the series). Still, I found myself absolutely taken by the fidelity of the world Rockstar was able to build on a new generation of hardware -- the fact that the gameplay within it was tried-and-true made it all the more compelling to me. That, and I just love causing large-scale chaos. Crackdown 2, where are you?

Patapon
Every once in a while, Sony surprises me by being the innovator. Patapon is one of those games that you can never truly describe properly -- you just have to play it to appreciate how unique it really is. Side-scrolling strategy + rhythm game = a very happy me.

Pure
I really, really miss SSX. And by that I mean the good SSX games: one, one-point-five, and three. What does this have to do with ATVs? Pure is the closest thing I've yet found to the trick-based racing thrills of EA's M.I.A. snowboard racing series. It's fast, the controls are perfect, and the courses -- while there aren't gads of them -- are built for fun, not the sake of being true to reality.

Super Street Fighter II Turbo HD Remix
As a diehard Street Fighter player from the introduction of SF2, this isn't just a great game -- with its numerous tweaks and enhancements -- it's one of the greatest examples of fan service ever. It's also one of the increasingly few games you can actually say was "lovingly crafted."

Games That Let Me Down

In this article: best-of-2008, best-of-the-rest-2008, PC, PS3, PSP, Wii, Xbox-360
All products recommended by Engadget are selected by our editorial team, independent of our parent company. Some of our stories include affiliate links. If you buy something through one of these links, we may earn an affiliate commission.
Share
Tweet
Share