Apple's HomePod arrives in Canada, France and Germany this June 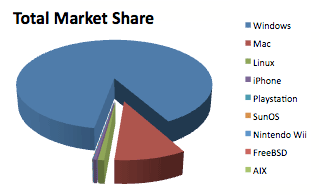 Microsoft's share of the operating system market is dropping, while Apple computers and handhelds have topped 10 percent for the first time, according to a new report on Internet-connected computers.

NetApplications, the company that tracks browser and operating system market share for a variety of sites across the Internet, released its data for December 2008. According to a Computerworld analysis, the number of Windows users decreased in December by 0.94 percent to 88.7 percent.

The fall was the steepest in four years since Net Applications began collecting data, and was also more than twice that of any similar period in the previous three years. The Computerworld article does note that December statistics do slant slightly towards the Mac due to the reduced number of in-office days for corporate users, but the overall shift is decidedly Mac-ward even once that's accounted for.

Apple's share is just over 10 percent, if one combines the market share for both Macs and iPhones. Macs account for 9.63 percent of computers online. (Windows Mobile devices are included in the 88.7 percent figure.)

Also of note, almost three quarters of Macs online have an Intel processor. This time last year, less than half had one. Overall, Mac OS X's share grew by 31.7 percent compared to a year ago.

Windows XP remains the operating system with the largest installed base, with over 65 percent of the market.

In this article: market, marketshare, netapplications, research, share, statistics
All products recommended by Engadget are selected by our editorial team, independent of our parent company. Some of our stories include affiliate links. If you buy something through one of these links, we may earn an affiliate commission.
Share
Tweet
Share